Thursday thoughts ~ at the end of the day 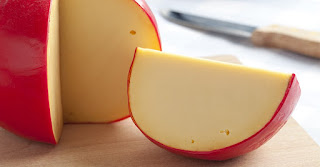 You’re in lockdown.  The only items you have to survive on are foods starting with the letters of your first name.  What is keeping you alive?
The rules don't say only ONE kind of food for each letter, so I stocked up for the long haul.  Donna put hers on Jean's Facebook post (thanks for the fun, Jean), and I see Donna and I have Navy beans in common:  Drinking water; Oranges; Nuts; Navy beans; Apricot preserves.  Now it's YOUR turn.  Go for it. 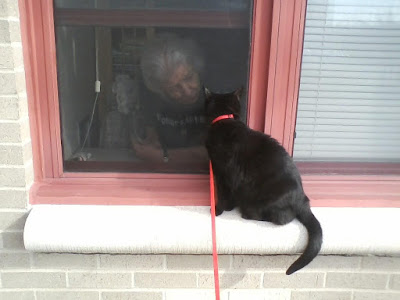 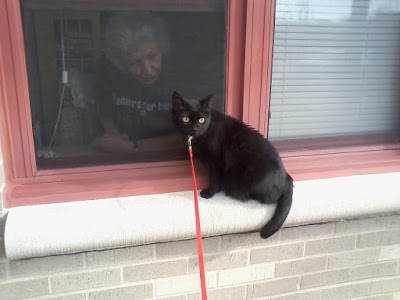 The sun was shining and the temperature reached 73°F, so I took Clawdia outside for a walk in the grass.  She visited Donna through the window, while I stayed six feet away (see the long leash?). 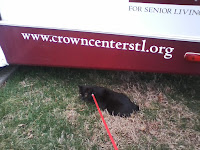 Continuing our stroll, Clawdia discovered the Crown Center bus, parked with the back of it over the grass where she was walking.  I drew the line (and the leash) when she wanted us to go under the bus.

While we were outside, a couple walking on the Greenway waved at me; it was Lauree and her husband Ron.  She told me that her mother Tiny is doing fine.  We saw several people while out and about, including Emma at the Crown Center greenhouse.  I chatted with Ginny in Tallahassee by using Facebook's private messages.  Connecting with folks far and near.
Posted by Bonnie Jacobs on 3/26/2020 09:30:00 PM
Labels: Clawdia, Crown Center, Donna, Emma, Ginny, Jean, Lauree, Ron, Thursday Thoughts, Tiny