Exercise ~ and all that jazz


Apparently, I can't make myself exercise alone in my apartment on a regular basis.  I need a group setting to keep myself focused.  Yesterday, I went to the Introduction to Movement, a 30-minute class.  Today, I joined the Better Balance class, which also meets on Thursdays.  Tomorrow, it will be Fitness with Melissa and maybe Fitness on Demand a couple of hours later.

Our instructors usually have music playing in the background.  The Better Balance rotation included "And All That Jazz," which I noticed because a few weeks ago a musical group performed "All That Jazz" here at the Crown Center.  The song has come up in more than one exercise group since then.  I'm loving it! 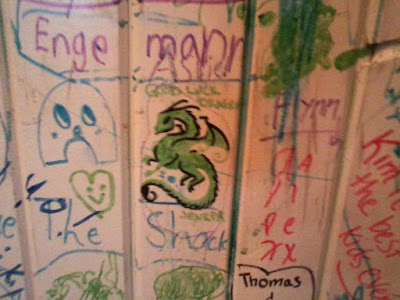 It doesn't usually occur to me to photograph what I'm eating, but while having lunch with my friend Donna this week at The Shack where people are given markers to write on the walls, I made an exception.  Next to me was a magnificent, small dragon which was too low for Donna to see from her side of the table.  So I whipped out my camera to show it to her ― and now to you.  A black-and-green dragon amidst the graffiti. 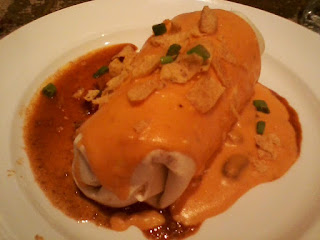 While I had the cell-phone camera in hand, I also snapped what we had ordered because it arrived at that moment.  Serendipity?  I guess.  Anyway, I had this huge burrito on chili covered in cheese and Fritos, full of bacon and hash browns. 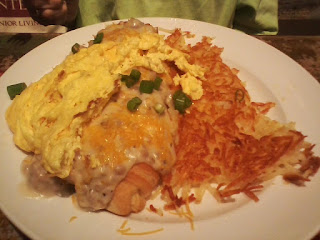 Donna had a croissant with scrambled eggs and sausage called "Why the French Hate Us."  Donna's hash browns were on the side.  We both took half home for the next day's lunch. 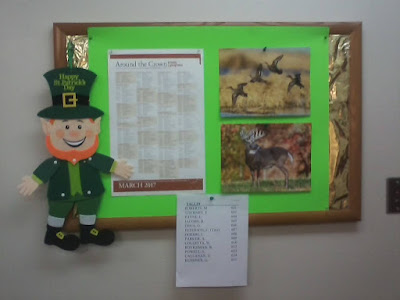 And now for the art of the bulletin board.  I've started changing the board by the elevator on my floor, the 6th floor, every month.  It's a volunteer thing, which I've done three times so far, as you can see.  For March, my neighbor Tiny added St. Patrick to my two nature pictures. 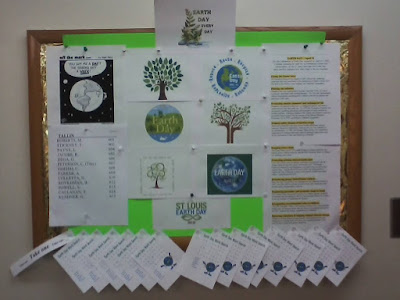 The focus for April was Earth Day, with "Take One" word-search puzzles hanging from the bottom of the bulletin board. 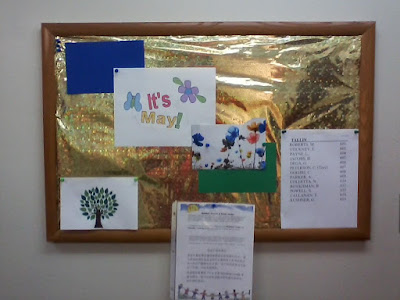 For May, I decided to unclutter the board and open it up for a breath of fresh air.  By the way, most floors have an extra push-pin or so for events that come along during the month.  At the bottom in this one is information about the Resident Council meeting for that Thursday, and (if you click to enlarge the photo) maybe you can see the announcement is in English, Russian, and Chinese. We're a very diverse community, here in our retirement center.

In these first three weeks of May, I've completed these seven books:


"Mythology was never designed to describe historically verifiable events that actually happened.  It was an attempt to express their inner significance or to draw attention to realities that were too elusive to be discussed in a logically coherent way" (loc. 209).


"I keep thinking his mind is like a broken necklace ― some beads are lost forever while the rest are just scattered everywhere" (loc. 1230).

"He has studied Shakespeare's work for the length of Shakespeare's lifetime, but he has forgotten how King Lear ends" (loc. 2990).


"Every day, the Court is flooded with petitions seeking certiorari, or 'cert.'  When four justices grant cert, it means the Court will hear the case.  To save time, we [Supreme Court clerks] read through the cert petitions, put them into a standard memo format, and recommend whether the justice should grant or deny cert" (p. 16).


"As I have said before, death at the Julius and Rebecca Cohen Home for Jewish Seniors is not what you would call an unusual event.  Sad, yes.  Unusual, no.  Given the average age and state of health of the residents, it is perhaps surprising we are not having memorial services on a daily basis" (loc. 74).

"Listen, we're not getting any younger, you and I, and we should be having all the new experiences we can, while we can" (loc. 2149).

Bloggers gather in the Sunday Salon — at separate computers in different time zones — to talk about our lives and our reading.
Posted by Bonnie Jacobs on 5/21/2017 02:00:00 PM 1 comment:
Labels: bulletin board, Donna, salon, Tiny 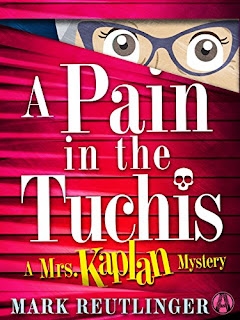 A Pain in the Tuchis: A Mrs. Kaplan Mystery ~ by Mark Reutlinger, 2015, mystery


"I should have suspected all was not quite kosher with Vera Gold's death when one of the men carrying her body accidentally tripped at the front door and almost spilled poor Vera onto the ground.  This was not a good omen."

This is a "cozy mystery" where "a notorious crank meets an untimely fate."  I rarely read those.  Maybe once a decade or so.  Nevertheless, I chose this for the same reason my friend Donna bought it and suggested it to me ― we live in a senior retirement center provided by the Jewish community in St. Louis, and the setting for this book is a Jewish home for seniors.


"The Julius and Rebecca Cohen Home for Jewish Seniors is probably like most such establishments, except most of the residents ― not all, but most ― are Jewish.  They serve kosher food, and we celebrate all the Jewish holidays. ... The residents are a real mishmash of people..." (loc. 120).

Our place is the Gladys and Henry Crown Center for Senior Living.  We also get kosher food and celebrate all the Jewish holidays, but I think our "mishmash of people" is even greater, in that we have lots of Russian and Chinese speakers and people from places like Armenia, Jamaica, Egypt, Japan, Korea, China and Russia (obviously), and all across the USA.