Book from the library

They Called Us Enemy ~ by George Takei (with Justin Eisinger and Steven Scott), illustrated by Harmony Becker, 2019, memoir


This is a graphic memoir recounting actor/author/activist George Takei's childhood imprisoned within American concentration camps during World War II.  In 1942, at the order of President Franklin D. Roosevelt, every person of Japanese descent on the west coast was rounded up and shipped to one of ten "relocation centers," hundreds or thousands of miles from home, where they would be held for years under armed guard.  A firsthand account of those years behind barbed wire, the joys and terrors of growing up under legalized racism, his mother's hard choices, his father's faith in democracy, and the way those experiences planted the seeds for his astonishing future.  What is American?  Who gets to decide?  When the world is against you, what can one person do?

I put this book on reserve after reading those words above:  "What is American?  Who gets to decide?"  We're going through such a period right now and are putting parents and children in detention centers, but separated from each other.  I think this is even worse, but the question remains, who decides these things?  Who decided these refugees are dangerous enemies? 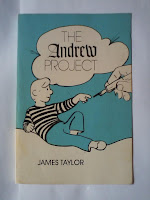 
This book makes a grand assumption:  that when we act as creators and bring into being something that was not there before, we are somehow like our own Creator; and the things we create are somehow like ourselves.  If this is so, then we may be able, by examining closely our relationship with something of our own creation, to learn more about our relationship with our Creator.  This book is an attempt to carry out such an examination.

To be a human being in any full sense of the term involves asking certain difficult questions about oneself.  Who am I?  What is the purpose of my life?  How can I know which answers to such questions are valid?  Philosophy, religion, and the arts have evolved as means of understanding and responding to such issues.

James Taylor wrote in his acknowledgments:


"Dorothy Sayers' The Mind of the Maker, which I came across after the project was well under way . . . convinced me that it was worth doing" (p. 106).

Since I was intrigued by The Andrew Project when I first read it in 1988, and now that I've read it again, I went looking for the book by Dorothy Sayers and bought it for my Kindle (for only $1.99).

Book for my Kindle


This classic is by turns a meditation on language, a commentary on the nature of art, and an examination of the fundamental tenets of Christianity.  Dorothy Sayers sheds new, unexpected light on a specific set of statements made in the Christian creeds.  She examines anew such ideas as the image of God, the Trinity, free will, and evil, and in these pages a wholly revitalized under-standing of them emerges.  The author finds the key in the parallels between God's creation and the human creative process.  She continually refers to each in a way that illuminates both.

In this spiritual classic, Sayers focuses on the concept of God as creator, drawing on her own experience as a literary creator.  "The Christian faith," she writes, "is the most exciting drama that ever staggered the imagination of man."  On the cover of this early edition are these words:  "Sayers has used all her talents of wit, literary insight, and human wisdom to trace the analogy between the creativeness of the human craftsman and the creativeness of God."

Book from my TBR shelves


What do you say when you know you don’t have forever?  Ruth has been Ann’s closest friend for years — her confidante, her solace, her comic relief, her tutor in life’s mysterious ways.  So when Ruth becomes ill, Ann is there for her without question.  After all, it is Ruth who encouraged Ann to become who she is, Ruth whose rebellious, eccentric spirit provided the perfect counterpoint to Ann’s conventional, safe outlook.  And so the friends go on as they always have, gossiping — consoling, and sharing intimate secrets — but with the knowledge that each shared evening could be their last.  This is a story about the strength and salvation of women’s friendships — an intimate, uncensored portrait of love and loss, struggle and resilience.

Actually, this is another re-read.  I now have the paperback (pictured above), but I read the hardback copy from the library back in early 2011, when I rated it a 9/10.  I've just started re-reading it this afternoon.  It will be interesting reading, as people panic about the coronavirus.

Books for the Mount TBR Challenge
I'm passing along these books as I finish them, trying to reduce the number of books that are on my shelves and filling my apartment.  Here's what I've completed so far in 2020.

I thought George Tekai did a great job with his graphic novel.