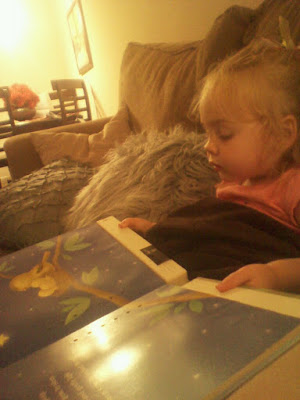 This is a photo of my great-granddaughter Raegan reading.  Below is my rating system, which is totally subjective.

"When you're kind to people, and you pay attention, you make a field of comfort around them, and you get it back — the Golden Rule meets the Law of Karma meets Murphy's Law" (p. 261).

"Gratitude, not understanding, is the secret to joy and equanimity" (p. 295).

"I hadn't learned about grace from the church.  But I did learn about it from sober drunks who managed to stop drinking by giving their will over to the care of God and who then tried like hell to live a life according to spiritual principles.  What the drunks taught me was that there was a power greater than myself who could be a source of restoration, and that higher power, it ends up, is not me" (p. 48).

"I realized that sometimes the best thing we can do for each other is talk honestly about being wrong" (p. 107).

"I long for black and white, I really do, but that's not how I experience the world.  I continue to learn, over and over again, that there are often more than just two possible labels for things" (p. 137).

"There was little doubt as to who was really in charge.  Maybe I needed a dog.  But then did I really need another thing to boss me around?" (p. 116).


"Her cruelty of depriving a child the comfort of family was beyond comprehension, but only a heartless woman would split up twins" (p. 248).


"Pa, people want the books.  It's my job to tend to the folks who are hungry for the learning."
He lifted the courting candle.  "A woman ought to be near the home fires tending that."
"But if I marry, the WPA will fire me" (p. 5).

"Born on January 7, 1891, in Notasulga, Alabama, Hurston moved with her family to Eatonville, Florida, when she was still a toddler" (loc. 4879).
"Over a career that spanned more than thirty years, she published four novels, two books of folklore, an autobiography, numerous short stories, and several essays, articles, and plays" (loc. 4874).
"When Zora was there, she was the party. . . . She would sometimes write in her bedroom while the party went on in the living room" (loc. 4907).
Hurston's footnote:  "The word Nigger used in this sense does not mean race.  It means a weak, contemptible person of any race" (loc. 5101).

"I am the one who should have been around for my wife and unborn son.  Instead, I was having drinks in a hotel in Singapore while my wife's health was deteriorating so badly she could die" (p. 73).


"Emily . . . seemed aware only of whoever was talking, as if she were listening in a way that most people never did" (p. 3).

"Lillian Barlow had never been a woman interested in self-reflection.  Was she afraid of what she would find?  Or did she already know, and didn't like what she saw?" (p. 156).

"I knew your mother.  She might have been half visionary, half nut job, but she wasn't afraid to speak her mind." . . . "I had never heard anyone encapsulate my mother so perfectly" (p. 195).

"I realized by watching you grow up that books could make a difference.  More specifically, children's books could change the world" (p. 276).

"In her [Idia's] dream, a woman was fighting in a raging battle.  Arrows zipped through the air at her from all directions, but they missed. . . . Quickly, the dream changed; the battle was over, and the brave woman helped to heal those who were hurt by mixing herbs and potions and making the wounded fighters feel better with a single touch" (np).

"Juliet was a pilot ... She flew for the Air Transport Auxiliary during the war.  They used to deliver all the aircraft from the factories to the RAF" (p. 24).

"Sure enough, between cockamamie (ridiculous; incredible) and codswallop (something utterly senseless) I found coddiwompler: someone who travels in a purposeful manner towards a vague destination" (p. 62).

"So if a kid feels lonely or left out, he can sit on the bench and someone will come over," Deon said.
"He or she," Kym corrected.
"The bench acts like a signal," Lizzy said.  "Everybody needs a buddy" (p. 41).

"The Easter Rising still strikes a chord of heroism in Ireland, and in the rest of the Irish diaspora, today.  It is remembered as the beginning of the road to Irish Independence" (p. 319).

"Yesterday's Bookshop," I said.  "It commemorates the past but acknowledges that we aren't still living in it" (p. 309).

"Magazines were far more popular than books, especially 'practical' magazines such as Women's Home Companion and Popular Mechanics.  The mountaineers were hungry for ways to improve their lives, and they found the magazines on home health care, cooking, agriculture, child care, parenting, canning, hygiene, hunting, and machinery particularly helpful" (p. 33).


"What's the delusion?"
Dr. Polus sighed almost imperceptibly.  "He thinks he's an eighteenth-century Orthodox Jew from an imaginary shtetl in the forest" (p. 94).

Ailsa (who had a heart transplant) emailed Seb (who had a cornea transplant):  "Did you surgeon [REALLY] use the words 'keep an eye on it'?  One of my consultants used to say 'pump' instead of 'heart.'  As in:  'you have to put your pump into it.'  I'm not sure what the point was but it made me laugh" (p. 150).

"I understood now how secrets, even kept with the best intentions, could corrode a relationship" (p. 260).

"None of the sharing-the-same-body thing [with her younger self] made any sense.  It was strange that Tesla hadn't written much about the weird melding process" (p. 219).

"If you are a writer you need to put what you imagine into words and then you need to read those words in order to understand yourself.  After that, you might feel a need to put those words before others.  I think I have to say that need is the operative word" (p. 64).

"In the hills of northeastern Oklahoma, Mary's Cherokee tribe provided education for everyone.  Her great-great grandfather, John Ross, had served as Principal Chief of the Cherokee Nation.  He helped create a school that later became a state teacher's college, which Mary began attending at the age of sixteen" (no pagination).

33.  Before the Coffee Gets Cold ~ by Toshikazu Kawaguchi, translated by Geoffrey Trousselot, 2019, time travel fiction (Japan), 3/10 (annoying, because most of the characters had names beginning with "K," and I couldn't distinguish them)

34.  Aven Green: Sleuthing Machine ~ by Dusti Bowling, illustrated by Gina Perry, 2021, children's chapter book, 9/10
35.  Grammar for a Full Life: How the Ways We Shape a Sentence Can Limit or Enlarge Us ~ by Lawrence Weinstein, 2020, English language


"Each of my hundreds of students had a unique grammatical profile. . . . What is more, these students' different grammar choices seemed to correspond to their diverse personalities, their distinct ways of understanding and dealing with life" (p. 10).

"According to [linguist Benjamin Lee Whorf], any language will do more than enable its speakers to convey their thinking to each other: It will also somewhat mold their thinking.  Whorf argued that, by making certain thoughts easier to express than others, a language helps determine what one thinks and feels in the first place" (pp. 10-11).

"It still makes a difference to my morale whether I relate bad news about myself before the coordinating conjunction but or after it" (p. 12).

"We are faced throughout out days with this grammatical decision: the choice of what to put before the conjunction but and what to put after it.  Whatever goes last usually receives emphasis (called by grammarians end-focus). . . . we exercise the astounding power to declare which truth is the proper takeaway — the more useful of the two, going forward" (p. 115).

"I'm convinced that my zeal for living a full and authentic life is a direct result of my scrappy early years as one of the last children living and learning in Mill Creek Valley" (p. 17).

"In Mill Creek, every aspect of life was labor intensive and time consuming.  We boiled water to wash dishes, clothes, and our bodies; we built fires to heat the house, and walked everywhere we wanted to go.  On the rare occasion we rode a streetcar, it was never just a straight trip — we always transferred at least once, maybe twice to get to our destination" (p. 61).

"This summer, she wasn't going to be Jay's widow, Cristal's younger sister, a kindergarten teacher, or a reliable volunteer at the library.  She was going to find the person who hid inside her — the one that had been broken" (p. 16).

"Thanks for helping Kacy understand you don't have to be number one to be a winner" (p. 104).

"Athletics is just not me.  I'm not into agoraphobics ... You know, people in leotards leaping around in a gym, all hot and bothered," Mavis said, speaking with her mouth full of cake.  Dot laughed, "I think perhaps you mean aerobics" (pp. 14-15).

"Hypertrophic cardiomyopathy — inflammation of the heart muscle — is the leading cause of sudden death in athletes.  It doesn't happen often, and the instance is even lower in women than men.  But it does happen" (p. 16).
"Letting go wasn't a betrayal, but rather a pure form of love.  But letting go entailed acceptance of reality" (p. 188).
"No, it's not about giving up. . . . It's about letting go" (p. 270).

"Men can't help themselves, so the burden falls on women to keep society safe and close to God.  Do you understand?" (p. 40).

"She could see why, on leaving places like Carrigbrack, many young women went to England or America.  It wasn't because they were ashamed.  It was because they'd been abandoned" (p. 48).

"Religion had treated her like a criminal when in reality she'd been a victim" (p. 96).

"There's a part of you, Annabel, that always holds on to the first time you said goodbye.  Especially when you didn't realize you were saying it at the time" (p. 104).

"We think Ringo can smell the disease," Joni said.  "Herlikes people who don't have the bug.  And he likes you, so you're probably immune" (p. 46).

"How were we, crouching obediently in our monastery doing Christ's bidding of tending to the sick and poor?  How were we spreading His gospel?  We were only praying to save our own souls" (p. 151).

"My father . . . did what so many men do:  he divided women into groups . . . the intellectual twins, the woman of the mind and the one of the heart. . . . I had the misfortune to be designated the heartless one, my mother the mindless one.  It was a disservice to us both but, on balance, I think she got the better deal" (p. 281).

"Bisto's presence, his mischief and lightness, was a perfect antidote to Barbara's frostiness" (p. 133).

Allie:  "The only car she could see coming was a shabby older white van with some kind of writing on the side.  As it pulled closer, Allie could see an old woman behind the wheel, and on the dashboard, a curled and sleeping cat.  This odd pair of travelers was looking like her one and only chance" (p. 124).

"As she climbed the stairs to her room, it occurred to her that for the first time in almost as long as she could remember, she was the one offering help rather than having it offered to her, and it felt good" (p. 209).

"Adolf Hitler.  He seemed to decide on everything in Germany and none of his decisions made any sense.  What she didn't understand was why the other adults didn't tell him how wrong he was?" (p. 95).