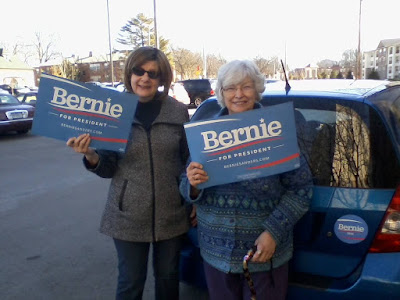 Donna and her sister Jane left the Crown Center in St. Louis at 11:45 this morning, heading to Davenport, Iowa.  Along with Jane's son Marty, whom they picked up minutes later, they plan to campaign for Bernie, maybe working the phone banks or knocking on doors this weekend.  They have good weather for this trip. 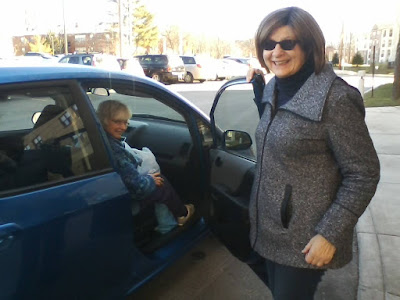 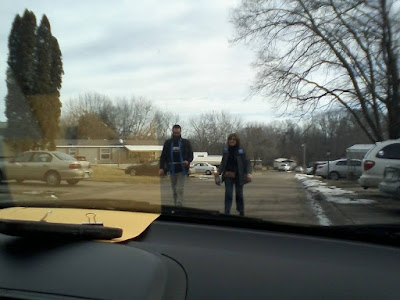 Maybe I should call this TOOsday, as in TOO much TO do TOOday.  TOO many things going on!  Here are TWO things on my calendar for my official TWOsday post. 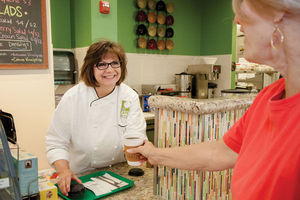 (1)  Lunch with friends in the Circle@Crown Café before our....
(2)  book discussion of Go Set a Watchman by Harper Lee.

Beginning ~ with a million reasons 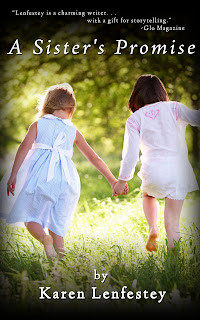 
"Kate could list a million reasons why she didn't have kids.  No, more like reasons why she shouldn't have kids:  genetics, a dysfunctional family, and ultimately, the fear that she wasn't cut out to be June Cleaver or Carol Brady or Claire Huxtable.  TV moms always made it look so easy, but Kate knows better."

It's a free book right now for Kindle, which is why I got it today.  So did my friend Donna.  Maybe it will be a book worth discussing together.  Here's the plot summary:


When Kate’s little sister, Joely, refuses a medical treatment because it will leave her infertile, Kate is willing to say anything to save her sister’s life — even promising to have a baby.  Kate decides to keep her rash words a secret from her husband until she can figure out whether she really wants to be a mother.  Especially since they agreed their marriage would remain childless.  A sister’s promise and a wife’s promise: Kate must break one.  Should she risk everything she has for the unknown?

Katheryn @ Book Date is hosting a Full House Reading Challenge.   She designed a bingo card that bloggers use to read books and play bingo at the same time.  Here's the playing card: 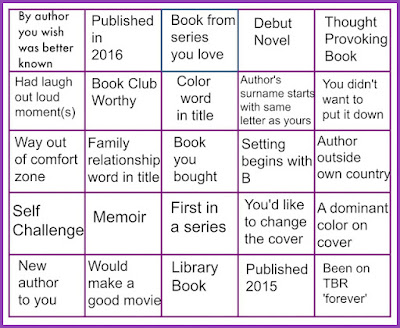 * Self Challenge means setting a challenge for yourself for this square.  For example, Kathryn said she might read a book by a male author, because she hardly ever does that.

* Setting beginning with B.  This can be a country, a state, a place, a street.  Or it could be a beach or the bush or a bookshop, as long as a good part of the book is set there.  The whole book might be, but it doesn't have to be.

Library Loot ~ only one today

Being Mortal: Medicine and What Matters in the End ~ by Atul Gawande, 2014


Is it medicine's job to keep us alive?  Or is it well-being that really matters?  I don't want to spend my dying days in a nursing home in a bed with rails that hold me in or tied into a wheelchair.  All that does is prolong my dying, not help me really live as I want to live.  Gawande argues that quality of life is the desired goal.  I heard about this book in one book club and plan to suggest it to my other book discussion group.

Library Loot is a weekly event co-hosted by Claire @ The Captive Reader and Linda @ Silly Little Mischief that encourages us to share the names of books we checked out of the library.  See what others got this week.
Posted by Bonnie Jacobs on 1/13/2016 08:00:00 PM 2 comments:
Labels: library loot 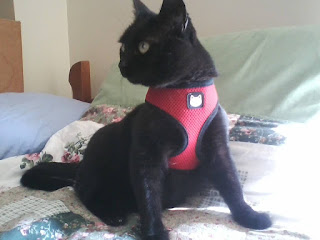 Day 1 ~ Monday ~ I'm trying to get Clawdia to wear her cat harness so I can use a leash to take her places.  When I put it on her, however, she collapses like it has sapped all her strength.  I decided to get her used to it by letting her wear it while she's at home.  Yesterday, she plopped down and refused to move off the bed.  (See above.)  I left for a meeting; when I returned, she acted like she had "found herself" up high in our bedroom, still wearing the harness, but now suspiciously unable to jump back down the way she usually does.  Acting pitiful, she finally came down on her own, when I refused to help her.  It is, after all, something she does several times a day.  She jumped down onto a box, whimpered, and waggled her left paw off the edge of the box, as if she were now crippled and wasn't sure she could jump down another fifteen inches to the bed.  What a drama queen!  Of course, she could do it.  And did, eventually.  When I took the harness off her before bedtime, she went to the living room and ignored me, saying without words, "I don't think I like you any more."  Eventually, she came and joined me, but stayed at the foot of the bed away from me, the big bully who put that red thing on her. 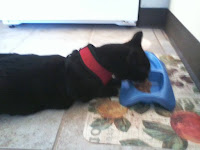 Day 2 ~ Tuesday ~ She didn't move from atop the bed while I was gone to a lunch-time meeting downstairs for a couple of hours.  I noticed she hadn't even eaten her "breakfast," which was dried out in her bowl.  When popping open a new can of food didn't entice her to move, I pull-walked her to the edge of the bed to jump down, pull-walked her to the kitchen, and left her in front of her bowl.  This is how she ate, lying flat on the floor because the harness wouldn't let her stand up to eat as she usually does.  After she ate a few bites, I watched her walk backwards to the living room (behind her) and sit down, exhausted from the 36-inch trip backwards.  It's a powerful thing, that harness.  It causes a mighty cat to lose all her powers, like being able to walk — or jump onto the table or counter — or even off the bed.  It incapacitated her, I tell you!  And this is the cat I found a few weeks ago up near the ceiling on top of the highest bookshelf.  When I force her to wear this ... this ... THING, she creeps around like a geriatric patient on her last legs.

I wish I could explain to her that, wearing it, she would be able to go outside.  She could walk through the lobby of our building, go visit Donna or Tiny, or just get OUT for awhile.  She loves exploring and being with people and getting out of our apartment.  If she can adjust to wearing this, maybe ... just maybe ... she won't have to travel everywhere in her cat carrier.

Oh, by the way, someone asked me if the harness is too tight on her, if that's the problem.  Nope, if anything, it's too big.  When I tried using the leash to walk her to the elevator (a trial run) a few days ago, I had to carry her most of the way.  When I put her down beside the chairs at the elevators, she refused to move, "stood her ground" when I tried to get her to walk with me, and pulled right out of the harness!  No, she didn't get lost.  She had escaped that cruel captivity ... and ran like crazy all the way back to our apartment door.

Day 2 ~ Still Tuesday ~ I went to a late afternoon meeting, leaving Clawdia "undressed" — in other words, not wearing her harness.  When I got home, she was napping in the easy chair, apparently once again able to jump up onto things.
Posted by Bonnie Jacobs on 1/12/2016 07:00:00 PM 2 comments:
Labels: Clawdia

Beginning ~ with an intimidating doctor


"The first doctor my mother drags me to is a tall, thin man.  He seems to think his direct approach will intimidate me, and maybe it would if I cared, but I don't."

This is a free Kindle download today, so I got it.  Here's a summary of the novel:


Seven-year-old Anna adores the constant commotion of her large family in 1970s suburban Chicago.  Anna idolizes her ten-year-old sister Liz.  Together they make kites, climb trees, and play acrobatic games on their backyard swing set.  One moment the two girls are playing — the next, everything changes, and Anna will never be the same.  In the constant hubbub of life in a huge family Anna’s distress is overlooked, until she completely stops eating at the age of seventeen.  Fearing the worst, Anna’s mother takes her to see Dr. Ellison, a cool competent psychiatrist, who immediately hospitalizes Anna on the fifth floor of the local hospital.  Even under the guidance of Dr. Ellison and the caring staff, Anna is defiant.  She trusts no one.  She guards the past like her life depends on it.  Will she ever share the truth so she can heal?