Beginning ~ with a storm rolling in 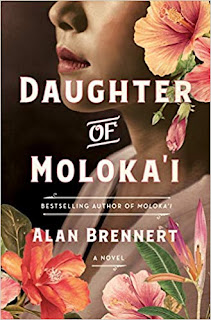 
"A wave of Kona storm clouds rolled across the jagged peaks of the Wai'anae Range, arriving in Honolulu with a cannonade of thunder and the kind of wind and rain Hawaiians called lani-pa'ina, 'crackling heavens.'  In the harbor even the largest ships seesawed in their berths; one little steamer, the Claudine, barely made it into port by sunset, before the sundered clouds began to weep and rage."

Daughter of Moloka'i ~ by Alan Brennert, 2019, fiction (Hawaii and California)


This companion tale to Moloka'i tells the story of Ruth, the daughter that Rachel Kalama — quarantined for most of her life at the isolated leprosy settlement of Kalaupapa — was forced to give up at birth. The book follows young Ruth from her arrival at the Kapi'olani Home for Girls in Honolulu, to her adoption by a Japanese couple who raise her on a strawberry and grape farm in California, her marriage and unjust internment at Manzanar Relocation Camp during World War II — and then, after the war, to the life-altering day when she receives a letter from a woman who says she is Ruth's birth mother, Rachel.

Daughter of Moloka'i expands upon Ruth and Rachel's 22-year relationship, only hinted at in Moloka'i.  It's a richly emotional tale of two women — different in some ways, similar in others — who never expected to meet, much less come to love, one another.  And for Ruth it is a story of discovery, the unfolding of a past she knew nothing about.  Told in vivid, evocative prose that conjures up the beauty and history of both Hawaiian and Japanese cultures, it's the powerful and poignant tale that readers of Moloka'i have been awaiting for fifteen years.


I read the first book soon after it was published, a decade and a half ago.  That was several years before I had a blog.  I can still remember much of the story, or at least enough that I don't feel like I must re-read it before jumping into the story about the daughter in this new follow-up novel.  I loved the first book and am looking forward to the rest of the story.  Here's what it was about:


Rachel Kalama, a spirited seven-year-old Hawaiian girl, dreams of visiting far-off lands like her father, a merchant seaman.  Then one day a rose-colored mark appears on her skin, and those dreams are stolen from her.  Taken from her home and family, Rachel is sent to Kalaupapa, the quarantined leprosy settlement on the island of Moloka'i.  Here her life is supposed to end — but instead she discovered it was only just beginning.

I really liked both Moloka'i and Daughter of Moloka'i. I was pulled in quickly, liked the characters, and the stories.