Which book would you choose?


"In 1994, in the Roseland neighborhood of Chicago's South Side, a 14-year-old girl named Shavon Dean was killed by a stray bullet during a gang shooting. Her killer, Robert "Yummy" Sandifer, was 11 years old. Neri recounts Yummy's three days on the run from police (and, eventually, his own gang) through the eyes of Roger, a fictional classmate of Yummy's. Roger grapples with the unanswerable questions behind Yummy's situation, with the whys and hows of a failed system, a crime-riddled neighborhood, and a neglected community. How could a smiling boy, who carried a teddy bear and got his nickname from his love of sweets, also be an arsonist, an extortionist, a murderer?" 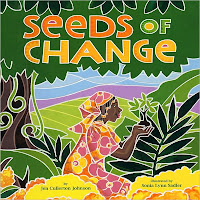 
"As a young girl in Kenya, Wangari was taught to respect nature. She grew up loving the land, plants, and animals that surrounded her — from the giant mugumo trees her people, the Kikuyu, revered to the tiny tadpoles that swam in the river.  Although most Kenyan girls were not educated, Wangari, curious and hardworking, was allowed to go to school. There, her mind sprouted like a seed. She excelled at science and went on to study in the United States. After returning home, Wangari blazed a trail across Kenya, using her knowledge and compassion to promote the rights of her countrywomen and to help save the land, one tree at a time.  This book brings to life the empowering story of Wangari Maathai, the first African woman, and environmentalist, to win a Nobel Peace Prize." 
"As Bird struggles to understand the death of his beloved grandfather and his older brother’s drug addiction, he escapes into his art. Drawing is an outlet for Bird’s emotions and imagination, and provides a path to making sense of his world. In time, with the help of his grandfather’s friend, Bird finds his own special somethin’ and wings to fly."


"Just months before the completion of the famous Bible that bears his name, Gutenberg was sued by his financial partner for diverting funds to a secret project. When Gutenberg would not share the project, the courts awarded the entire Bible printing business to Johan Fust, leaving Gutenberg with nothing but his secret.  Rare book librarians Madeline Zayne and Keith Drucker are unlikely heroes crossing the U.S. and Europe to track down the legendary tome Gutenberg was working on. When found, it proves to be an encoded rubric that reveals the final resting place of the Library of Alexandria, hidden by its protectors 2,000 years ago. Greed, fear, biblio-terrorism, and Homeland Security stand between the lovers and the discovery of the world’s greatest collection of ancient documents."


"Gin Boyle is an albino, a classically trained pianist, and a woman with a painful past. Disavowed by her wealthy stepfather, her unlikely savior is the farmer Mr. Toad — a little man with a taste for women's corsets. Together with their two children, they weather the hardship of rural life and the mockery of their neighbors. But with the arrival of two Italian prisoners of war, their lives are turned upside down. Thousands of miles from home, Antonio and John find themselves on Mr. and Mrs. Toad's farm, exiles in the company of exiles."


"The child of a field slave on the Amity sugar plantation in Jamaica, July lives with her mother until Mrs. Caroline Mortimer, a recently transplanted English widow, decides to move her into the great house and rename her “Marguerite.” Together they live through the bloody Baptist War and the violent and chaotic end of slavery."


"In the wake of the Iranian revolution and the hostage crisis, Arman seeks to avoid his country's political turmoil and focus on his own problems. His father, a former general under the Shah, is in the hospital. His American fiancée, Julia, the daughter of one of the hostages, is in hiding in his home and growing increasingly distraught as the crisis stretches on. But when a former agent in the Shah s secret police blackmails him into joining a CIA-supported coup against the new regime, Arman is drawn into the revolutionary vortex. The book shows lower-class Iranians who used the revolution for revenge against the upper classes, patriots who joined the revolution to end the Shah s tyranny, and the opportunists who were willing to turn any political upheaval to their advantage."

FOOTNOTE:  As a Day 5 Giveaway Winner during Armchair BEA last week, I was instructed to choose from a huge list of giveaways.  I narrowed it down to these books.  Which of these would you pick?
Posted by Bonnie Jacobs on 5/31/2011 05:31:00 AM
Labels: books

I saw your name on the winners' list, congratuations! I've read both Yummy and Cemetery of Dreams and liked them both. Yummy is a quick graphic novel read, but very good. Cemetery of Dreams is also good with some interesting history/politics in it. Of course, none of this helps you decide....

Oh, I've already decided. Winners had to submit a list of five that we liked, and I've been notified which of my choices will be sent to me. After a few more comments, I'll reveal what I've won.

Helen, I chose the two you named in your comment — Yummy and Cemetery of Dreams — BECAUSE of your reviews of those books.

Hey, readers, here's a loud shout-out to Helen for contributing several books for Armchair BEA winners. Cemetery of Dreams was the only one of several books she donated that was unclaimed by the time I noticed I was a winner and went to look over the long list, but somebody else gets that one.