My siblings and I got an email from our brother Saturday, with this photo attached.  Our family name is Setliffe, with an "e" on the end because my grandmother decided the name didn't look finished.

Love you all,
Jim

I wish the photo weren't so fuzzy, but it's still interesting to see my own ancestors.  Jim tells me it's fuzzy because it's a copy from an original print done on glass before film was used.

Great-great-great-great is FOUR greats in the past, plus grandparents, plus parents, plus my generation, and I have a couple of great-great grandchildren of my own.  Let's see, how's my math?  Really, all I need to do is count on my fingers:
That makes ten generations.  Wow!  This list also spans parts of four centuries:  1700s, 1800s, 1900s, and 2000s.  I just noticed Nancy and Joseph (pictured above) lived through the American Civil War (1860s), including the assassination of Abraham Lincoln (April 1865).

On Sunday, Jim sent a link to a 1917 document about our grandfather, and I see he was still signing his name without the "e" a year and a half before my father was born.  I didn't realize he was born in Alabama (though I knew that grandmother was from Dinwiddy County, Virginia).  He lists a wife who is "dependent on him for support," but no children yet.  (Click on the document to enlarge it.) 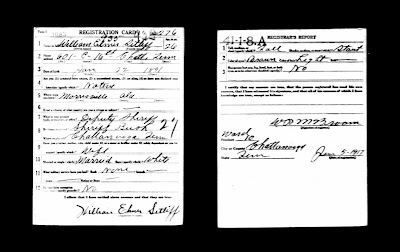 My father was W. E. Setliffe, Jr., and he signed his middle name with that same rounded "E" for Elmer. His "W" in William was different, though, and also more rounded.  Here's a photo of my father's father (who signed this form) when he was 16.  I've posted a close-up of it before.  I knew that he was a meatcutter because I have an old advertisement for the Setliff Meat Market.  I didn't know he had once been a deputy sheriff. 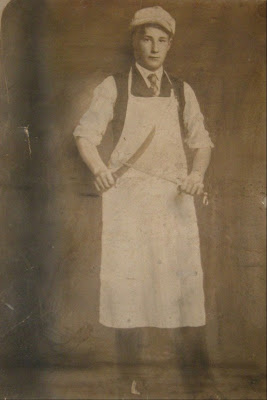 Okay, one last thing and then I'm through with genealogy stuff on this blog.  Last summer, when I reported on the closing of the church I grew up in, I posted photos of a bronze plaque dedicating the organ in honor of those from the church who served in World War Two.  You can see my father's name, spelled with an "e" on the end. 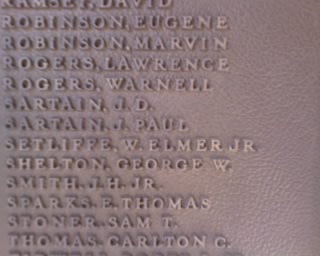 So here's another (unplanned) Monday Memories post.  It's very different from the first one and not at all book related.
Posted by Bonnie Jacobs on 5/30/2011 05:30:00 AM
Labels: family, memories

My mother is getting really into the family heritage stuff and is having such a wonderful time finding old UK records on ancestry.com. We've hooked up with distant cousins and found wonderful stories. It's amazing what documents the internet has!

Not sure if you've seen this yet, pretty cool.