Dispatches from the Mother Ship 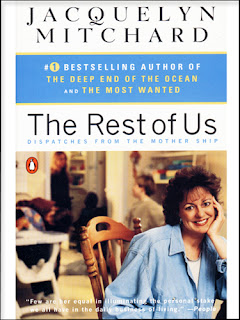 Motherhood is the general topic Mitchard covers in this collection of her column called "The Rest of Us" (notice "mother ship" in the sub-title).  How appropriate is a review of a book about motherhood on the day before Mother's Day?

Mitchard writes about her life, including her experience of raising five children as a single mother after her husband died when he was only forty-five.  At forty, she had to figure out how to be the only parent.  I really liked reading about her boldness.  I had to stop to make a note of this from page 145:

I like lots of things about this book.  The cover, for one.  Look closely, and notice a son behind her, a teenage daughter in the doorway, a son bent bent down to look at the baby in the high chair.  The cover is perfect for this book.  And it doesn't look staged.  It looks like a moment in a busy household with children.

I like her way of thinking about things from wishing on stars to raising children who aren't prejudiced:


"I believe in the afterglow of a good and long relationship, like the light of a star that keeps pulsing visibly to earth long after the star itself has been extinguished.  It may not make your wishes come true, but it can light your way" (p. 145).

"...determined to help my children grow up believing that one person's gender or religious preference doesn't shape the world for anyone else" (p. 147).

That last one is from the chapter entitled "One Giant Step for Womankind."  And finally, below, is the last quote I'll share here, something that made me think -- and remember:


"My parents believed they had put me to bed, but I would creep out into the hall, with my book or my writing pad, nearer to the small light from the bathroom, and listen to my parents, their family, and their friends, talking below. ... These long eavesdropping nights made me a storyteller.  They communicated to me, without anyone's ever needing to tell me, that the true apprehension of life's puzzles and pains is not in the living but in the recounting" (pp. 202, 203).

Ha!  I remember listening, too.  But mostly I can relate to the feeling that I haven't finished living an event until I've told it.  Maybe that's what I like best about having a blog.  And it doesn't matter if no one else reads what I write, though that's a bonus.  The important part is that I get the story right.

I recommend this book for lots of reasons -- its excellent writing, her down-to-earth thinking, and the shortness of each section that allows me to stop whenever I need to do something else, and still come back for more.  And more.