Beginning ~ with a stone

Daughters of the Stone ~ by Dahlma Llanos-Figueroa, 2009, fiction (Puerto Rico)

As I write this, I'm in the middle of the five stories that make up this novel, the stories of five generations of women.  What I'm sharing with you today is a bit different -- giving the opening of each of the five parts because each is like a separate novel of each woman in turn.  The last ones are like teasers to me, since I haven't gotten that far in the book.


A gray braid falling over each shoulder, Tia Josefa stuck her head out of the window of Las Agujas, the embroiderers' cabin located just behind the main plantation house.  The wagon returning from town swung around the main house and came to a final halt in the batey of Hacienda Las Mercedes, a sugar plantation near the northern coast of Puerto Rico.  (Page 5)

Mati spent every day outdoors.  Her carved box sat on the spot that her mother had occupied at the table.  She lay under the trees, where she was cool and safe, while the women worked.  Their voices lulled her into a quiet sleep.  When she awoke hungry and cranky and the milk was gone, the women would pull guanabanas from the trees and squeeze the mushy pulp between their fingers, letting the juice drip into her little mouth.  (Page 63)


Concha learned her world through her feet.   She was a baby when she first became aware of them.  Even before she explored the face of her mother, Mati, or the mustache of her father, Cheo, she knew her feet.  They fascinated and entertained her in her crib world.  She had been watching them a long time.  She wanted to feel these things.  She pulled and twisted and wrapped her small hands around them.  She got familiar with them and started sucking on the little parts.  And that felt good.  She hated it when Mati insisted on covering them.  (Page 132)


Elena was comforted by her father's presence as he drove the pink and gray 1950 Studebaker down the country road.  The flamboyan branches, heavy with their red blossoms, struck the car as it made its way.  It had been drizzling all morning, and the windshield wipers kept a steady beat, "Don't go . . . don't go . . . don't go."  (Page 201) 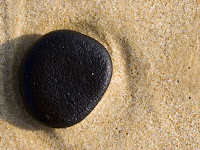 I stood in the front of the room feeling quite proud of myself.  I would have the best show-and-tell of any of my classmates.  I waited until the class was absolutely quiet and then held out my hand.  I opened one finger at a time to add to the mystery.  The students snaked their necks to see what I was holding.  Then there it was, the black pebble in my hand.

The room was quiet for a moment and then exploded into laughter and loud voices.  (Page 249)

Each beginning makes me want to know more. I especially want to know what happens to the fifth girl/woman, who speaks to us in the first person. She's telling about all the others as well as herself. Why? What was it about her family tree -- I should say, about the matriarchs -- that compelled her to tell their stories? 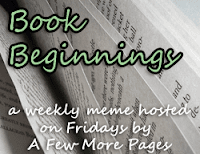 This meme is hosted by Katy at A Few More Pages. Share the first sentence or two of the book you are reading. Then, share your impressions of that beginning. Click this link to see what others say about the books they are reading this week.
Posted by Bonnie Jacobs on 5/06/2011 05:06:00 AM
Labels: book beginnings

This sounds like a lovely collection of stories. Enjoy!

Those are all really beautiful; I'm intrigued. Thanks for sharing. I like getting multiple snippets like that.

That's a great way of introducing us to a book. Thank you.

What a great post - thanks for sharing all five beginnings. I don't think I would have been satisfied with just the one! Sounds like a lovely book - it is going on my TBR pile!
Here's my beginning:
http://thebookgatherer.blogspot.com/2011/05/book-beginningson-friday.html