Books I — literally — couldn't give away


Summary:  "Leigh Botts has been author Boyd Henshaw's number one fan ever since he was in second grade. Now in sixth grade, Leigh lives with his mother and is the new kid at school. He's lonely, troubled by the absence of his father, a cross-country trucker, and angry because a mysterious thief steals from his lunchbag. Then Leigh's teacher assigns a letter-writing project. Naturally Leigh chooses to write to Mr. Henshaw, whose surprising answer changes Leigh's life."

The People: No Different Flesh ~ by Zenna Henderson, 1967, fantasy


Summary:  "A race from another planet become marooned on earth. The People have the very best of human qualities: love, gentleness, spirituality; and also special powers of healing, levitation and other abilities.  One stormy night, Mark and Meris find a young girl, who has fallen in a capsule from the sky and has special abilities. The couple are still grieving the loss of their own baby and must come to terms with the emotional issues that caring for the young girl creates in both of them." 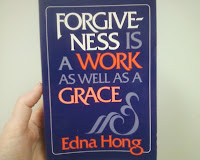 Forgiveness Is a Work as Well as a Grace ~ by Edna Hong, 1984, religion


One sentence from the book jumped out at me, as I flipped through it just now:  "I might have succeeded in forgetting the event if it had not so obstinately persisted in remembering me" (p. 77).  That's the problem with the saying "forgive and forget," isn't it?  I decided to read this book.


Funny, the difference a few hours can make. At 4:30 p.m., Frank Reynolds still has a sense of accomplishment and control. By five o'clock, he's lost his job of twenty-two years. By six o'clock, he's learned of his father's Alzheimer's disease. An hour-and-a-half is all it has taken to turn Frank's world upside down, thrusting him and his family onto a path none of them could ever have expected.  The one certain thing now is change. 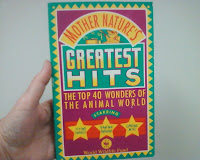 
From the Foreword:  "The animal kingdom provides an endless source of amusement and fascination for the casual observer ... The more we study the astounding range and diversity of animal life and behavior on this planet, the more wondrous nd unfathomable Mother Nature's creation appears.  Yet every day, whole species disappear forever from the face of the earth.  And when they vanish into extinction, their unique contribution to the grand experiment of life on this planet vanishes with them." 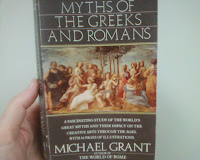 Myths of the Greeks and Romans ~ by Michael Grant, 1962, history (Meditarranean world)


Grant demonstrates the dynamic effect that ancient mythology has had on the creative efforts of succeding centuries. He summarizes all the myths as well as the legends of the lesser gods and heroes, and traces their origins in historical fact or religious myth. He then shows how myths have continued to evolve throughout the ages. The author's brilliant investigations lead from Pericles to Picasso, Homer to Freud, Apuleius to Grimm - and prove that mythological themes have been continuously restated in art, science, and folklore, up to the present day.

Another resident of my gated senior community came into the computer room while I was working on this post.  She got excited about this book about myths and, when I told her it was one of the books I couldn't even give away, she offered to buy it.  I told her it was hers.  It had, after all, been left outside after my yard sale along with a "free books" sign. 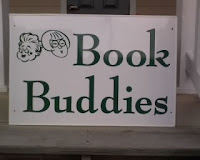 Which leads me to the subject line of this post.  When I took part yesterday in the neighborhood yard sale, I sold only 43 books.  Rather than pack up several boxes of books that were left, I changed my YARD SALE sign to FREE BOOKS.

A man who had bought books earlier came back by my house, saw the sign, and stopped again, leaving with another box full of books.  I left the rest of the books outside another couple of hours, and when I came back, there were still books unclaimed, including these six that I decided to read (well, except for the book on myths I gave away while typing this to post Sunday morning).  I'll donate the rest to the "library" where I live — which consists of three bookshelves where readers living here leave books for anyone else who wants to read them.


Behind me, I heard the same man asking: Where is God now?
And I heard a voice within me answer him: ... Here He is—He is hanging here on this gallows.

No one took Night? Don't they know what they are missing? It's such a fabulous book and so important! I hope the books find good homes. Surely someone has a grandchild that might want a Beverly Cleary

I agree, Helen. There were not as many out in the neighborhood yesterday -- at least not as many as last year. One street over, I heard, had almost no yard sale traffic at all. I'm on the main road, so people driving by saw my signs and the books and boxes out front.

On the other hand, he may very well know what SELLS to shoppers who frequent yard sales and flea markets. I don't.

That is sad about Night... if you peruse my book shelves you will find doubles and triples of some of my books... books I feel are important I always pick up extra copies if I find them at sales so I can keep passing them to friends.... I currently have two copies of Night.. one I may be passing on during Banned Books week now that I know it was challenged...