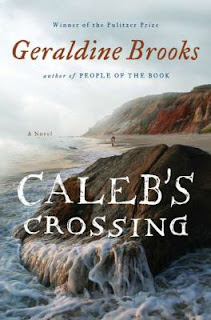 
Summary:  In 1665, a young man from Martha's Vineyard became the first Native American to graduate from Harvard College.  Vreeland used that fact to tell this story.  Bethia Mayfield, narrator of the novel, is growing up in the tiny settlement of Great Harbor amid a small band of pioneers and Puritans.

Restless and curious, she yearns after an education that is closed to her by her sex. As often as she can, she slips away to explore the island's glistening beaches and observe its native Wampanoag inhabitants. At twelve, she encounters Caleb, the young son of a chieftain, and the two forge a tentative secret friendship that draws each into the alien world of the other.

Bethia's minister father tries to convert the Wampanoag, awakening the wrath of the tribe's shaman, against whose magic he must test his own beliefs. One of his projects becomes the education of Caleb, and a year later, Caleb is in Cambridge, studying Latin and Greek among the colonial elite. There, Bethia finds herself reluctantly indentured as a housekeeper and can closely observe Caleb's crossing of cultures. 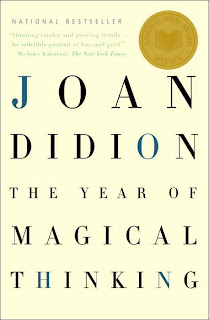 The Year of Magical Thinking ~ by Joan Didion, 2005, memoir

Look at that cover!  I haven't read anywhere that the four blue letters spell J-O-H-N, her husband who died.  I thought it look kind of "blah" until I noticed some of the letters were a different color.  Now I see why.


Summary:  The story of a year in her life that began with her daughter in a medically induced coma and her husband unexpectedly dead due to a heart attack. This powerful and moving work is Didion's "attempt to make sense of the weeks and then months that cut loose any fixed idea I ever had about death, about illness . . . about marriage and children and memory . . . about the shallowness of sanity, about life itself."

Library Loot is a weekly meme co-hosted by Claire from The Captive Reader and Marg from The Adventures of an Intrepid Reader that encourages bloggers to share the books they’ve checked out from the library.  Marg has the Mister Linky this week, if you'd like to share a list of the loot you brought home.
Posted by Bonnie Jacobs on 6/01/2011 06:01:00 AM
Labels: library loot

Geraldine Brooks is always a good choice! I tried reading the Joan Didion and couldn't do it, so I hope you have a better time with it. And, how clever are you? I never noticed the JOHN on the cover!

I enjoyed Joan Didion's book, read it during my study of death. I didn't realize her husband's name was hidden in the title until I read it somewhere and thought it was brilliant. http://looseleafnotes.com

I enjoyed Joan's book and didn't realize her husband's name was hidden in the title until I read about it somewhere. I thought it was brilliant.

Helen, picking out "JOHN" from the title is the one-word extent of my reading of that book ... lol.

Colleen, did Joe actually comment on my blog? Or were you using Joe's account earlier? I think it's interesting you (or Joe?) did a study of death, since I also did that many years ago. I read dozens of books, starting with On Death and Dying by Elisabeth Kübler-Ross.

Joe using gmail and when he uses our home computer blogger automatically has him signed in. Sometimes I foret to log him out and log me in.

I almost picked up the Brooks book at the library today- I hope you post a review of it ;)

And I agree with your other reader-I tried the Didion book, I just couldn't get into it. Maybe it's my life stage?

I just read Caleb's Crossing and really liked it. I hope you enjoy your loot!

I've lost track of the number of times I've seen the Didion book around but I'd never noticed that about the cover. Clever!

The Didion book looks sad but interesting, and Geraldine Brooks is a favorite of mine - I must pick up Caleb's Crossing!

Have a good weekend with those great books.

Caleb's Crossing sounds fascinating. I'd like to read it as well.

I ended up buying Caleb's Crossing when I went to hear Geraldine Brooks speak, which means I likely wont get to read it for years!