The story I am about to share with you takes place in 1931, under the roofs of Paris.  Here you will meet a boy named Hugo Cabret, who once, long ago, discovered a mysterious drawing that changed his life forever.

But before you turn the page, I want you to picture yourself sitting in the darkness, like the beginning of a movie.  On screen, the sun will soon rise, and you will find yourself zooming toward a train station in the middle of the city.  You will rush through the doors into a crowded lobby.  You will eventually spot a boy amid the crowd, and he will start to move through the train station.  Follow him, because this is Hugo Cabret.  His head if full of secrets, and he's waiting for his story to begin.

Nothing I ever read about this book really called to me, and I put off reading it for -- what? -- four years now?  Since I rate it 10 out of 10, I want to say something that encourages others like me to reconsider getting a copy.  That introduction by one of the characters does it for me. 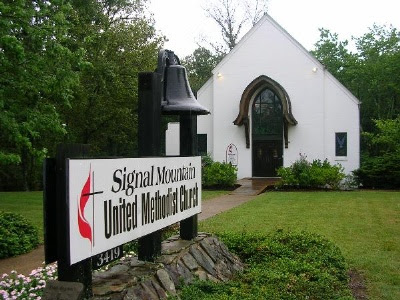 When I was working on my doctorate, I learned that my professor had produced several videos.  It occurred to me to write my dissertation as though it were a movie.  I wrote what I called a "verbal video," beginning with a man picking up the clapper for the bell in front of our church.  A swarm of excited children followed him out the front door and down the sidewalk, each of them wanting a turn at clanging the low-hanging bell.  I used terms like "fade to black" when I changed scenes in the middle of my dissertation.  I tried in every way I could think of to "show" the story I was telling.  But I didn't think of this one. 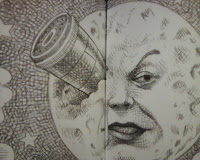 Brian Selznick drew the characters in such a way that the reader (viewer?) is watching the characters, just as a movie-goer watches a screen.  He even drew the movies themselves, the old black-and-white ones, like the moon from a movie remembered by the father of the main character. 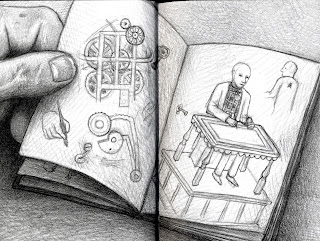 We watch Hugo tinker with cogs and wheels, and eventually we find out who that Professor Alcofrisbas really is.  This quote from page 374 seems to sum up Hugo's philosophy of life:


Hugo thought about his father's description of the automaton.  "Did you ever notice that all machines are made for some reason?" he asked Isabelle.

"They are built to make you laugh, like the mouse here, or to tell the time, like clocks, or to fill you with wonder, like the automaton.  Maybe that's why a broken machine always makes me a little sad, because it isn't able to do what it was meant to do."

Isabelle picked up the mouse, wound it again, and set it down.