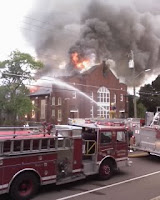 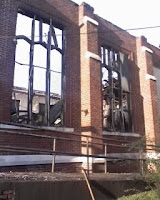 In August of 2009, several fire engines screamed past my house and stopped less than a block away.  The last one blocked the road at my corner.  When I dashed outside to investigate, black smoke was beginning to billow up from the church on the next corner.  I hurried down the block and got a few early photos with my cell phone.  I came home to post the news on my blog and on Facebook that St. Elmo Church is ablaze, right now. A lot of my clergy friends are familiar with this church, including one currently serving the English-speaking church in Austria and one former pastor of this congregation.  I got only a single photo posted before power went out in our block. 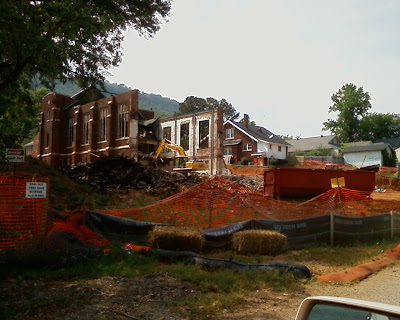 The church was gutted. The dangerous parts were torn down, but a shell of the old church remained while the congregation sought funding, had architects draw plans, and got permission to rebuild from the officials of our St. Elmo Historic District. Today, machinery was inside the shell, demolishing the last parts before rebuilding and enlarging the structure.  The new will be built within the three historic walls left standing. 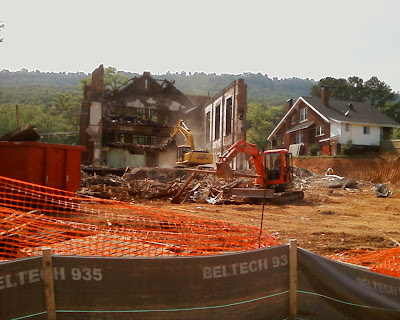 I watched the floor and balcony come down, pieces scattering and dust rising.  That's the pastor's house next door.  I drove into the alley behind the church to get these shots. 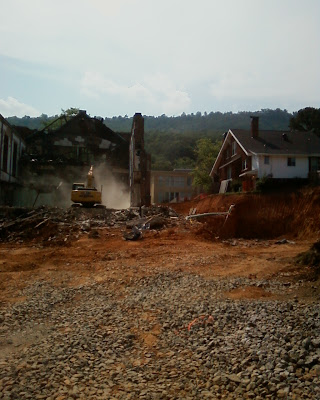 That yellow-brick building between the church and the parsonage is the old St. Elmo School, which is now part of the gated senior community where I live.  Those first four windows on the lower floor (left) are the bedroom and living room of my friend Donna's apartment.  She was the closest resident to the fire.  That highest line of trees in today's photos is the top of Lookout Mountain.  Click twice to enlarge today's photos.