Carina of Reading Through Life interviews book bloggers about their reading roots.  This week, it was Reading Roots: Christina from Chrisbookarama, whose blog I read regularly.  Carina asks them about the early influences and experiences that formed them into readers.  How would you answer her questions?

1.  What is your earliest memory involving books or reading? How were books, reading, and literacy approached in your childhood home? Were your parents or other family members readers?


My dad was an artist, and my mother was a poet.  They met when she was a hall monitor in high school and he left his art class to go wash his hands before the next class.  Both of them read to me until I could read for myself.  And they were expressive readers who put a lot of life into how the characters would speak.  My parents told me I would learn to read when I went to school, so I was extremely excited on my first day of first grade (no kindergarten for me back in 1945).  However,  I came home from that first day of school very disappointed that my teacher didn't teach me how to read after all.

2.  Did you enjoy language arts/English classes as a kid, or were you more of a reluctant reader? When did you first consider yourself a reader?


I was never reluctant about reading.  One day my mother saw me reading to my baby brother when we were both preschoolers.  She soon realized I wasn't exactly reading, but had memorized the whole book.  Is that a reader, or not?  I was about six when I wrote the earliest "poem" I still have — I wrote it for my daddy. (Was I trying to be a poet like my mother?) I continued to write and even joined the writer's club in high school.  My English teacher liked one of my stories, written for an assignment, and had me read it at a meeting of English teachers. Even though everything I've published has been nonfiction, I've considered writing a novel.  My friend Donna got me a tee-shirt with this across the front:

3.  Did you have any interesting reading habits when you were growing up? Do you still have them now?


Habits?  I was in the habit of reading everything, even the backs of cereal boxes.  Books have always been like friends, and I can't imagine not taking care of them.  I never, ever dog-ear a page.  I underlined and wrote in the margins of college and graduate school textbooks, and I do that still when I'm teaching from a book — simply because it's easier to use that way.  On the other hand, if I don't plan to keep and re-read a book, I keep it unmarked and in good shape so I can exchange it at a used-book store for some other book I want to read. 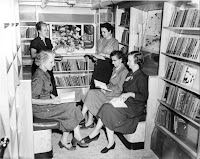 I'm not rich enough to buy all the books I read, so visiting the library is a lifelong habit.  Starting in my elementary school years, I'd wait every Thursday for the bookmobile to arrive in our neighborhood.  I'd be among the first in line so I could find and check out the three-book limit; then I'd rush home, read one of the books in less than two hours, and rush back to the bookmobile to exchange it for another, my FOURTH library book of the week.

I habitually read several books at a time, usually two or three or four nonfiction books that require thinking on a deeper level and taking notes — I should probably call it studying, which I do for my own edification or in order to teach a class — but I usually read only one novel at a time.  Unless books of fiction have greatly different stories, it's too easy to confuse them when read simultaneously, and I'd rather be immersed in only one.

Even so, I continue to read a lot.  So far this year, I've completed 93 books, averaging 21 books a month.

4.  Where was your favourite spot to read as a kid? Are there any books you distinctly remember from your childhood? Why?


Someone snapped a photo of me in my early teens, sprawled on the sofa reading, with my legs over the back of the sofa, my feet up the wall, and my hair hanging off the edge of the sofa. 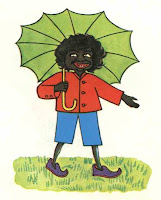 As for the actual books, at a very young age, I loved Epaminondas, who was even more literal in his understanding of the language than I was, and Little Black Sambo, who was such a smart little boy that he convinced wild tigers they would really rather wear his bright clothing than eat him.

From my elementary school years, I distinctly remember a series of biographies about famous people, including Abe Lincoln: Pioneer Boy and John Paul Jones: Naval Hero, which made me want to grow up to be a sailor climbing a ship's rigging.  In the sixth grade, I fell in love with the book Little Women when I was chosen for the part of Marmee in our class's two-hour play, performed in period costumes (the girl who played "my" oldest daughter Meg is still a close friend, and we're now 71).

5.  How have your reading tastes developed from childhood until now? What were the phases that you went through along the way? 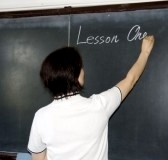 I read books I found on the shelves at home, both as a child and when I was first married — when the only books we had were college texts, mine and my husband's.  He was studying engineering, so I once read and studied a third of the way through his trigonometry textbook in two days.  (Honestly, I read anything!)  Since I am curious about everything, numbers as well as words, I have gobbled up books like cookies my whole life — books about people, places, things, ideas, and anything I'm curious about.  I read fiction mostly for the ideas.

I keep broadening my interests, then reining myself in to focus long enough to get another degree.  I've been known to tell people I had to hurry and graduate so I could to pursue a line of inquiry about something that I never had time to do while studying what the professors gave tests on.  When I became an adjunct professor, I could read as widely as I liked — and assign some of those really good books to my students.

6.  If you have children, how did you encourage them (or how are you encouraging them) to become readers? If you do not have children of your own, what do you think is the most important thing to focus on in order to promote reading in the coming generations? 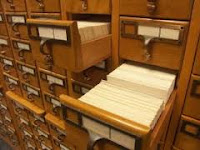 Not only did I read to my three children, I took them to the library twice a week.  As soon as they were able to write their own names, they got their own library cards.  The children's books were on the lowest level, and my kids would browse until they found the limit they were allowed to check out, then come find me.  They knew where in the stacks upstairs I could be found — in the 100s and 200s of the Dewey decimal system — as I was teaching myself philosophy and religion, even before I went back to college and got my first degree in (what else?) philosophy and religion, with English thrown in as a second major.

As I wrote recently about age-appropriate books, my children were allowed to read anything that interested them. I regularly bought them books, like at school book fairs.  Once while we were on vacation, I took them shopping in an unfamiliar mall and they started trying to distract me by pointing to things over to the left.  Suspicious, I looked to the right — and saw a bookstore.  They didn't want to spend their whole vacation in a bookstore, but I bribed them ... uh, I mean I persuaded them ... by promising to buy a book for each of them, in exchange for fifteen minutes in that store.

When a new library was opened near our home, my son happened by on his bicycle and came home to tell me, "Mom, you have more books than the library." It was true. I went to check on the veracity of his report and could see the library had a long way to go to be very useful to my family.

For the record, they are all still readers.  And so are all my grandchildren, except one who prefers to spend her time drawing.  Could that relate back to my father, the artist?