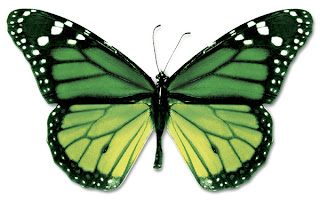 "A Sound of Thunder" is a 1952 science fiction short story by Ray Bradbury about a man who wants adventure, so he pays Time Safari to take him back in time to hunt a Tyrannosaurus Rex.  There are rules — like stay on the path, don’t touch the dirt, and only kill the dinosaur right before its natural death — so they don't do anything to radically alter the future. But the appearance of T-Rex is so terrifying that Eckels loses his nerve and runs away — and off the path. 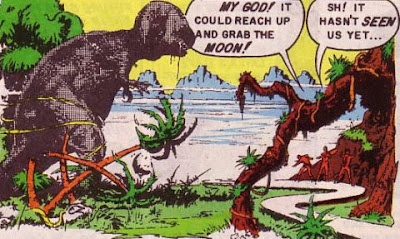 Is it a spoiler if I tell you part of what happened?  (I won't explain "a sound of thunder.")


"Eckels felt himself fall into a chair. He fumbled crazily at the thick slime on his boots. He held up a clod of dirt, trembling ... Embedded in the mud, glistening green and gold and black, was a butterfly, very beautiful and very dead."

I read the story online, free.  It's illustrated with cartoon characters, like this.  But I like my butterfly illustration better.
Posted by Bonnie Jacobs on 5/16/2011 05:16:00 PM
Labels: short story

This must have been the basis of The Simpson's episode where Homer makes a time travelling toaster, lol!

Chris, I don't know about the time traveling toaster. Was there something about the butterfly effect in that one?