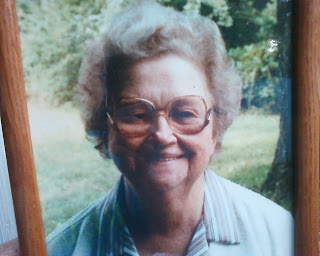 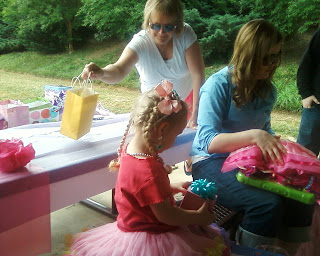 My great-granddaughter turned three yesterday.  This picture is from her birthday party in the park's pavilion.  She's a pink princess with braids, sitting beside her mother, with her Nana (my daughter) reaching for the last gift bag to be opened.  Raegan is opening a small pink box with a cupcake inside.

When I snapped this, I understood without a meow what Babe was saying:  "It's one thing to snuggle up together, but if you're going to show Jane what I did, well then...!"  And she stomped off in a huff on silent cat feet and never come back.  Yeah, that's a difficult maneuver — to stomp silently — but she managed.

Here's the only postcard I mailed during National Postcard Week.  It shows one of the Incline Railway cars decending from the top of Lookout Mountain to the valley.  I put the card in Jane's mailbox one day, and it was picked up the next.  Dear recipient, it would show "Hixson, TN" whether sent from Jane's house or mine. 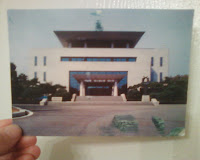 On Saturday, I received a postcard from my "dear recipient," a blogger I've enjoyed getting to know.  I remember now what's wrong with postcards — the P.O. stamped a bar code all over the bottom, which told me what was in this picture.  I can read "Republic of Korea," which is South Korea.


2.  The Gifts of the Jews: How a Tribe of Desert Nomads Changed  the Way Everyone Thinks and Feels ~ by Thomas Cahill, 1998, history

I found two books at my front door when I came home from Jane's on Friday, but I'm not sure how long they had been there, since I normally come in through the patio door.  I won these from Meg @ A Bookish Affair, and they look very interesting.

In Other Worlds: SF and the Human Imagination ~ by Margaret Atwood, 2011, essays and SF (short fiction, speculative fiction)


Margaret Atwood explores her relationship with the literary form we have come to know as "science fiction,” a relationship that has been lifelong, stretching from her days as a child reader in the 1940s, through her time as a graduate student at Harvard, where she worked on the Victorian ancestor of the form, and continuing as a writer and reviewer.  This book brings together her three heretofore unpublished Ellmann Lectures from 2010: "Flying Rabbits," which begins with Atwood's early rabbit superhero creations, and goes on to speculate about masks, capes, weakling alter egos, and Things with Wings; "Burning Bushes," which follows her into Victorian otherlands and beyond; and "Dire Cartographies," which investigates Utopias and Dystopias.  The book also includes some of Atwood's key reviews and thoughts about the form. Among those writers discussed are Marge Piercy, Rider Haggard, Ursula Le Guin, Ishiguro, Bryher, Huxley, and Jonathan Swift. She elucidates the differences (as she sees them) between "science fiction" proper, and "speculative fiction," as well as between "sword and sorcery/fantasy" and "slipstream fiction."


If it were possible, I’d never sleep again.

Everyone was talking about my dreams — even though I hadn’t told a single soul about them. Wherever I went, strangers were discussing my nocturnal visions. I wanted to chalk all of this up to coincidence, but then, only minutes after a chance encounter with a young woman I didn’t know, after she told me in perfect detail of the dream I’d had the night before, she was killed. And I knew I’d have to figure out what was happening to me.

My only hope was a woman who had a knack for falling dead asleep. With help from Claire, a narcoleptic, I would have to take a sleep-journey into the past and future affecting everyone’s life, including my own.

Some things to know about me — my name is Kevin Macy and I’m a partner in an ad agency in Boston, Massachusetts. I’m divorced, I smoke, and I’m an accomplished alcoholic. Not that it has anything to do with my story, but it’s part of who I am. And in the course of reading about these supernatural and bizarre events, those things will factor in.

Another important note — and this you will have a hard time swallowing, I’m sure — while on this strange journey of discovery, I died. And I mean that in the realest of ways — dead as a door nail — bought the farm — kicked the bucket. You get the picture. Of course being dead didn’t “stick,” otherwise I wouldn’t be able to tell you my curious tale.

Happy Mother's Day! How great that you have so much family near by to be with

Yay! I hope you enjoy the books!