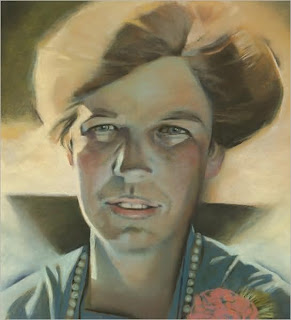 Yes, that's the front cover of this book, in its entirety.  The book's title is on the back.  Here's a summary of the book:


Eleanor Roosevelt was raised in a privileged but stern Victorian household, with an affectionate but mostly absent father and a critical mother who made fun of her daughter's looks.  Alone and lonely for much of her childhood, Eleanor found solace in books and in the life of her lively and independent mind.  Her intellectual gifts and compassionate heart won her the admiration of many friends — and the love of her future husband, Franklin Delano Roosevelt.


While other young women of her class were spending time at dances and parties, Eleanor devoted her energies to teaching children in New York City's poorest neighborhoods.  Later, she became the most socially and politically active — and controversial — First Lady America had ever seen.  Ambassador, activist, and champion of civil rights, Eleanor Roosevelt changed the soul of America forever.

Rappaport thanked a classroom of third graders for their honest appraisal of the book, so it was easy for me to read straight through this afternoon.   The author does a good job of making clear what Eleanor Roosevelt was like, as I remember her.  Here are a couple of quotes by Mrs. Roosevelt (the book has no page numbers).

"Do what you feel in your heart to be right — for you'll be criticized anyway." 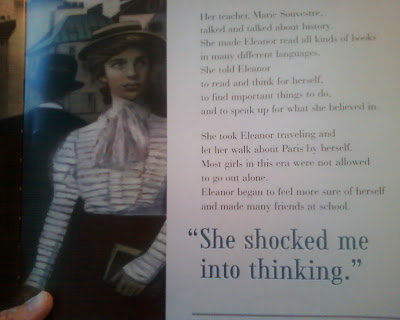 Eleanor learned to think for herself, partly because she had a teacher who "shocked [her] into thinking."  She was a woman ahead of her time.  Though she died in 1962, before President Johnson signed the Civil Rights Act of 1964, look at what she did "anyway," based on doing "what [she] felt in [her] heart to be right."  These words are enlarged and laid out as in the book.

The Daughters of the American Revolution
refused to let the great black contralto
Marian Anderson sing in their auditorium.
Eleanor resigned from the group:
"To remain a member implies
approval of that action,"
she wrote in her newspaper column.
And millions read her words.
She arranged for Anderson to sing
at the Lincoln Memorial.
More than 75,000 Americans —  black and white —
came to hear her.

Bonus story:  When I checked this book out of the library for my roommate (yes, I read it before she did and can probably count it as Library Loot this week), the librarian told me a story.  A library patron who is in his 80s told her he once "babysat Eleanor."  I started doing the math, and that didn't add up.  But wait!  He worked at an airport somewhere, and Eleanor was the only person waiting for the only small plane scheduled to leave.  His boss told him to "take care of her."  So now this elderly gentleman has fun telling folks he "babysat Eleanor."  I think it's a sweet story, and it shows how people loved her.
Posted by Bonnie Jacobs on 5/08/2012 11:40:00 PM
Labels: book review, library loot, women unbound

Eleanor Roosevelt was such an amazing woman, I always tell myself I will read more about her.

I think it is so important to have good quality biographies for child readers. I loved reading non-fiction from an early age and was always so disappointed by my library's small juvenile collection. Sounds like this is just the kind of book I would have loved to get my hands on when I was seven or eight and the illustrations look excellent.

I have been interested in Eleanor Roosevelt for a long time. I know some things about her from reading other biographies and history books, but never anything specifically devoted to her.