Postcards ~ do you collect them? 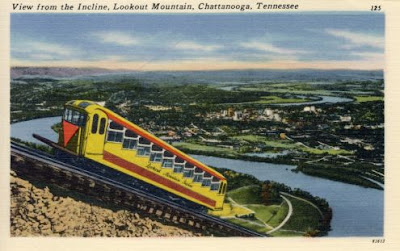 Oh, my goodness!  This is a very old postcard showing Chattanooga from atop Lookout Mountain, but the Incline Railway is not situated the way this shows.  Somebody had a real job, since photoshopping didn't come along for maybe 50-60 years after this card was made.  I found it while googling a postcard showing my town.  This incorrectly-placed incline would be arriving at Point Park, it seems to me. 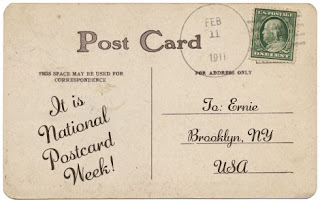 I was looking for postcards because I just learned from Jan @ Yearning for God that this is National Postcard Week, from Sunday, May 6, through Saturday, May 12.  I've never been a collector, but in sorting through my mother's things after she died, I discovered a number of postcards I had sent her over the years.  Most of them were from Holston Annual Conference at Lake Junaluska, North Carolina.  That's the annual event attended by all United Methodist ministers in the Holston area, along with an equal number of lay people.  I would send cards to each grandchild — whose number kept increasing over the years — plus my mother, except for the years I took her with me.


I will have to buy some new postcard stamps, which now cost 32 cents...


Thanks for telling me how much postage to put on the one postcard I happen to have (in a place where I know it is, at any rate). Someone who has sent me mail three (count them: 3) times will get this card. I promise. But first, I must go home from this house where I'm house-and-cat-sitting and put my grubby little hands on the postcard and the address.

Can you guess who that particular card will go to?  I failed miserably in sending out daily letters during February's Month of Letters, but Jan didn't.  Neither did Madge, or Paula.  Maybe postcards are better than nothing, better than getting no letter at all from me.  I also owe letters (or postcards) to Beth, and Helen, and Ginny, and Martha ... and my list is at home (I'm house-sitting, though I go home every day because I have to give Kiki two droppers full of her antibiotic, daily). 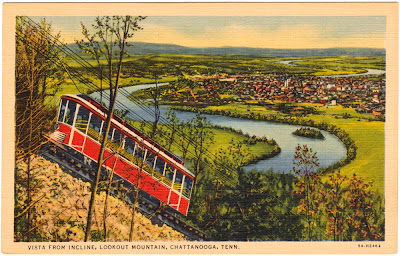 Hmm, I've found another vintage postcard of the incline, this one dated 1935, when my parents were in high school.  Maybe it was possible to see that much of the river from the side of Lookout Mountain above St. Elmo, but it still looks strange to me.  I guess I should go shopping for postcards about the Incline.  Or maybe I'll grab a friend and go ride the Incline today.  Surely, I could find photos and/or postcards at the actual site.

For those of you who are curious, last year I lived about a mile from the bottom of the Incline, in St. Elmo.  Now I have moved closer to my children, and we all reside on the other (northern) side of that river, beyond the ridges you see on the far shore, beyond the downtown area.
Posted by Bonnie Jacobs on 5/09/2012 05:09:00 AM
Labels: Kiki

Thanks, Bonnie! This National Postcard Week is spurring me on much better than the "letter writing month" did. I still remember reading an article in the newspaper about 30 years ago that it's better to send a postcard than nothing! I had forgotten how quick postcards can be. Yay!