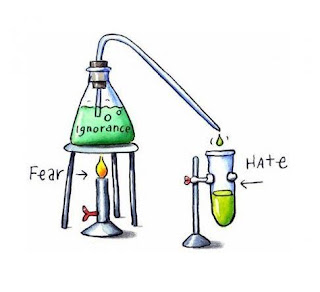 I found this interesting equation on Jan's blog.  It's now the prompt at Weekend Wordsmith, which asks, "What can you do with the idea that fear + ignorance = hate?" 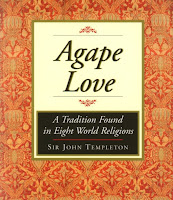 I thought of two things, the first being this quote from John Templeton's 1999 book Agape Love: A Tradition Found in Eight World Religions (p. 2):


"Perhaps without even being fully aware of it, religious leaders and their followers through the ages have defined religion largely in terms of love.  All the world's great religions, to varying degrees, both teach and assume the priority of love in religious practice.  To put it another way, whether consciously or subconsciously, the world seems to have determined that any system of beliefs that teaches or tolerates hatred or even apathy toward others does not deserve to be considered a religion in the first place."

That brings us to the other thing I thought of, a group of people who seem to have become official haters.  And they preach a god of hate.  You would think a group calling themselves "Westboro Baptist Church" is a Christian organization, but all the Christians I know at least SAY they follow a God of LOVE.

Another thing Christians say is that "a little child shall lead them," based on Jesus's assertion that God's kingdom belongs to people who can be like a child.  (I don't mean childish, but child-like.)  This week, we have a child to follow, a 9-year-old boy named Josef Miles, who stood up to the haters of the Westboro Baptist Church.  NPR reports his mom said:


"Josef was determined to make his own statement so we went to the car and with pencil and his sketch pad, he made up his own little sign that reads 'GOD HATES NO ONE,' " his mom wrote. "Those people are scary but he stood strong, was respectful and stood by his convictions. He will be a good man, I have no doubt. I got my Mothers Day present early."

Is it fear plus ignorance?  Is that what causes hatred?  What are they so afraid of?  Why do they think their god wants more hatred in the world?

Weekend Wordsmith offers a prompt each Friday, so you'll have a weekend to work on it (or start it) — and a week before the next prompt.  You may also write about any Weekend Wordsmith prompt that's ever been on the blog, no matter how long ago.  Think about the weekly prompt, write something on your blog, and come back to leave your link in a comment so others can read what you have written.
Posted by Bonnie Jacobs on 5/18/2012 12:05:00 AM
Labels: weekend wordsmith

Now that's a child that will go far in life! What a wonderful kid who is willing to stand up for a sane perspective in the face of scary haters!

And the hate goes on. See Golden-Daze Ginnie's blog:
http://goldendaze-ginnie.blogspot.com/2012/05/yikes-unbelievable.html

Hi Martha, I came over from Ginnie's Blog. My feelings about the Westboro Baptist group is that they follow their own rules. This isn't what Christianity is about. Studying scripture and being good Christians is what we are supposed to be doing.
And yes we make mistakes. I believe our guilt is our own punishment as God has already forgiven us.
But these people that try to hurt grieving families, well, that just doesn't seem like something a true Christian would do. And I think that little boy was amazing. I saw this somewhere. Love Di ♥
Thanks for letting me vent!!

You're welcome, Diana. I'm Bonnie, and I am sending people to read Ginnie's blog and Martha's blog, both about a different hate group.