Crippled in his right arm and leg, Aaron spent his childhood fending off a sister who wants to manage him.  So when he meets Dorothy, a plain, outspoken, self-dependent young woman, she is like a breath of fresh air.  Unhesitatingly he marries her, and they have a relatively happy, unremarkable marriage.  But when a tree crashes into their house and Dorothy is killed, Aaron feels as though he has been erased forever.   Only Dorothy’s unexpected appearances from the dead help him to live in the moment and to find some peace.  Gradually he discovers, as he works in the family’s vanity-publishing business, turning out titles that presume to guide beginners through the trials of life, that maybe for this beginner there is a way of saying goodbye. 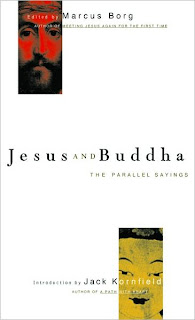 
Juxtaposing passages from the New Testament and ancient Buddhist scriptures, this book illuminates the striking similarity between the lives, deeds, and teachings of the two prophets.  It uncovers the strange and unexplained parallels between Jesus's sermons, Buddha's sayings, and the koans of Zen Buddhist masters. The sayings of Jesus and Buddha are often nearly identical. At the heart of these amazing parallels lie two mysteries. How could Jesus, living 500 years after Buddha in a land 3,000 miles from India, teach the same ideals?   Some historians believe that Buddhist principles were known throughout the Roman Empire, other theorists claim that Jesus was trained in Buddhism, and some even think he visited India.

This one relates to the book I checked out last week:  Living Buddha, Living Christ.  Three of us plan to discuss that book, and I want to read more on the subject.  It's kind of like being in school, studying the subject as well as reading the main book.  I enjoy that sort of thing.  Do you?

Library Loot is a weekly event co-hosted by Claire @ The Captive Reader and Marg @ The Adventures of an Intrepid Reader that encourages bloggers to share titles of books they’ve checked out of the library. To participate, add your post to their Mister Linky any time during the week. And check out what others got from their libraries this week.
Posted by Bonnie Jacobs on 5/02/2012 04:47:00 AM

Hope you really enjoy your discussion, and both the books!

I got a copy of The Beginner's Goodbye the other day and am really looking forward to it. I love Tyler's writing.

A friend of mine just started the new Anne Tyler. She said it's quirky (no surprise), but not her best. I hope you like it!

Jesus and the Buddha sounds really interesting. Can't wait to see what you think of it.

Marg, the discussion is about to start.

Kathy (BermudaOnion), I've read lots of Tyler's books and expect to like this one, too.

Helen, I may not like this one as much because of the subject, but I'll let you know.

Tanya, Jesus and Buddha is interesting so far. Facing pages have only one saying by Jesus on the left and one by the Buddha on the right. I can imagine pondering a pair of pages each day, though I'm not reading the book that slowly.