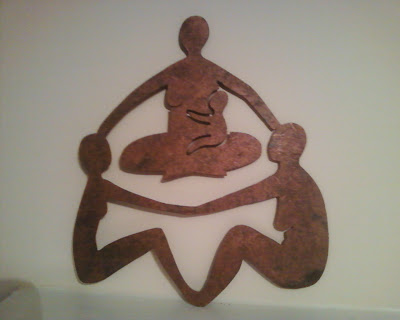 The seasons of a woman's life — maid, mother, and crone — are shown on this art piece I have.  Or I can imagine a fourth aspect, if we include the baby.  Before I was a young woman, I was a girl, beginning as a baby girl.

Our society focuses on youth as the most (maybe the only) important time of life, but some women now have "croning" ceremonies as a rite of passage into a time of wisdom, freedom, and personal power.  After I retired, I was croned in a circle of my friends.  My son said there's no way he would call me a crone.

Is there a word for an old man that is equally as negative as "crone" for an old woman?  Because our society does not value what a woman does or what she learns over a lifetime, women often refuse to divulge their age and many (if not most) women at some point dye their hair in order to look younger.  Men, though, are said to look distinguished with gray hair at their temples.

I got the idea to write this when I read Colleen's Thursday Thirteen (#7) for today, found here:

I wrote about my croning in a comment when Colleen posted about hers in 2007, here:

Do you know where I could find the maid/mother/crone wall art that you featured? I'd like to have one! Thank you! :)

Ebonyharp, I bought it years ago at New Moon Gallery in Chattanooga. I've never seen another piece like mine there or anywhere else, so someone there would have to remember the artist, if you were to get something similar. Maybe you could send them a photo of my art piece or direct them to this post.

The New Moon Gallery has since moved a few blocks to another location. You can see some of their products in this photo gallery and find contact information there: