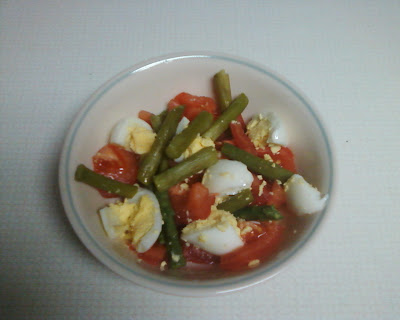 I don't usually get excited about food preparation, maybe because it too often seems like a lot of work to make a meal for one.  I do, however, like to experiment with salads.  My process is to toss in whatever I have on hand that sounds good to me at the moment.  It could be leftovers, like this one.  On Thursday, I had a hard-boiled egg from breakfast, a tomato, and some leftover asparagus from a recent meal.  So I cut up those together in a bowl.  After taking this photo, I added Roasted Onion Parmesan Dressing and called it a salad. 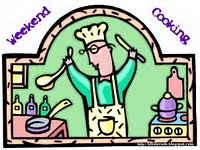 My lunch, which was delicious, now becomes my first post for Weekend Cooking @ Beth Fish Reads.  It's open to anyone with a food-related post to share:  book reviews, recipes, photographs, random thoughts.  If your post is even vaguely foodie, feel free to grab the button and link up.

The title of my sermon at St. Luke United Methodist Church this morning is Please, Thank You, Oops, and Wow!  Can you guess what the subject is?  If it's any help, the two scriptures I chose are First Samuel 3:1-10 and Mark 10: 13-15. 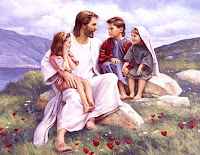 2.  The Gifts of the Jews: How a Tribe of Desert Nomads Changed  the Way Everyone Thinks and Feels ~ by Thomas Cahill, 1998, history

The salad looks so pretty with those great colors! Your reading list is full of books that make you think ... enjoy!

Salad days are definitely here! I made a one from leftovers yesterday, too... it was delicious.

A really good salad is just so darn yummy! My mom makes the best one, I eat it pretty much every night with dinner

Loved Gift of the Jews. I hope you end up loving it too.

Salads are a great way to deal with all sorts of leftovers!

Somebody else improvises in her kitchen. Thanks, Ruth, I enjoyed reading your post:
http://www.rutheverhart.com/blog/?p=1834

The subject of my sermon was PRAYER:

Both scriptures are about children. Can we be as excited as children about "Wow" things?