Sharon's kipa is not a toboggan 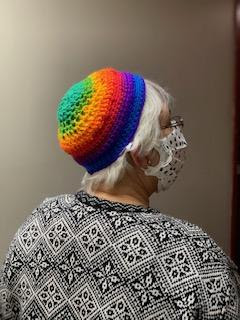 Sharon crocheted this kipa she's wearing.  I looked up the word last night and learned it can be spelled several ways, but "kipa" is what Sharon texted back when I asked what she calls it.  She's a translator of several languages, so I'll definitely go with her spelling.  Isn't her kipa beautiful?
Word of the Day #1

kipa / ki·pa / kēˌpä / noun = another term for yarmulke.  To know more about kipas worn in Israel, take a look at this tour group site.

yarmulke / yar·mul·ke / ˈyämə(l)kə / noun = a skullcap worn in public by Orthodox Jewish men or during prayer by other Jewish men.

I texted Sharon last night to ask what she calls her creation, "Do you call this a knitted cap or toboggan or something else."  She was confused, telling me she crocheted it.  Then she said, "A toboggan is like a luge in my mind."  So I need to add more definitions.
Word of the Day #3

toboggan / to·bog·gan / təˈbäɡən / noun = a long narrow sled used for the sport of coasting downhill over snow or ice, which typically is made of a lightweight board that is curved upward and backward at the front; verb = to slide downhill over snow on a toboggan.  Example:  "This dog is having fun riding his toboggan down the hill."  Click the link to watch the dog do it all by herself.

luge / lo͞oZH / noun = a light toboggan for one or two people, ridden in a sitting or supine position.  So a luge and a toboggan are the same thing.

A toboggan, to New Englanders and a majority of people who live in the northern part of the United States, is a wooden sled.  And that's why Sharon was confused when I used the word "toboggan" to ask about her "kipa" — a sled has nothing to do with what she wore on her head.  But wait!  There's another meaning for the word toboggan. 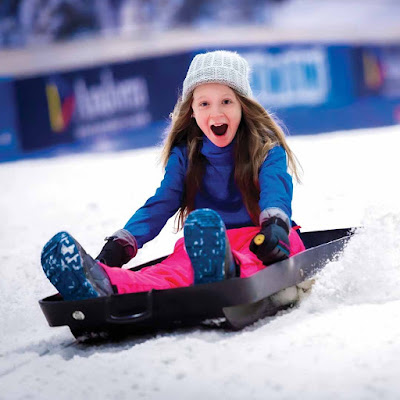 In the southern part of the United States, a toboggan is a winter hat.  Specifically, it has to be a knit hat.  Because of the freezing conditions, toboggan riders often wore knit hats to keep warm. These hats soon became known as “toboggan hats,” but since at least 1929, that second word has been dropped.  So a toboggan is a hat to Southerners, which may also include specific regions of Oklahoma, Missouri, Florida, Maryland, West Virginia, southern Indiana, and New Mexico.  If you're in the American South, your toboggan is your hat!  And the girl in this photo is wearing a toboggan while riding her toboggan down a hill.  And now you know that I'm from the South, and Sharon isn't.
Posted by Bonnie Jacobs on 2/17/2021 07:30:00 PM
Labels: Sharon, Wednesday Words, words

I love this! I never knew about the Southern definition of toboggan (which makes sense, seeing as I'm from my Ohio and my family from New York)! Sharon did lovely work on her kipa. It looks like she and I have a social distancing hobby in common - I started crocheting hats recently!

I have never heard the word "kipa" before, but Sharon's is beautiful! So colorful! The discourse about the meaning of "toboggan" made me smile. I think some words are regional-like "faucet" and "spigot" or "soda" and "pop." Maybe "toboggan" fits in there, too. Regardless, I learn something new when I read your blog, Bonnie and that is a good thing.

Kipa is new to me and hers is beautiful. And, I love the new look of your blog!