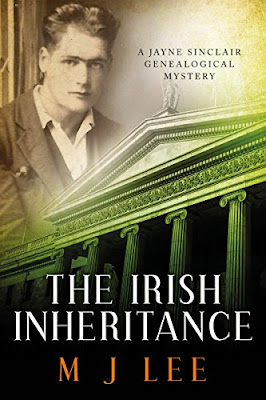 Sometimes, digging up the past reveals more than secrets.  While searching for a billionaire client’s true ancestry, genealogist Jayne Sinclair follows a trail of secrets back to the Irish War of Independence.  She has only three clues to help her — a photocopied birth certificate, a stolen book, and an old photograph.  But the closer she gets to the truth, the more her investigation puts her life in danger.

To celebrate St. Patrick's Day, I "bought" myself a free book for my Kindle with an Irish name and location.  It's free today, folks.  Unfortunately, the next one isn't.  Yes, being in a "bookstore" (even online) is dangerous for a bookie like me.  I had just read Nancy's review of Vintage 1954 by Antoine Laurain, discovered that my library does NOT have a copy, and neither does my nearby used book store.  So I downloaded this second book for my Kindle, even though it is NOT on sale.

When three residents of a Parisian apartment building and an Airbnb tenant from Milwaukee share drinks from an exceptional bottle of a 1954 Beaujolais, they find themselves waking up in 1950s Paris.  After their initial shock, the city of Edith Piaf and "An American in Paris" begins to work its charm on them.  The four delight in getting to know the French capital during this iconic period, while also playing with the possibilities that time travel allows.  But, ultimately, they need to work out how to get back to 2017, and time is of the essence.

It is so difficult to resist buying books when they are presented to us! My TBR shelf is way too full, but when I hear of a "must read" I have a difficult time stopping myself.

I thought my sentence in the previous comment was badly worded, so I'm back to say I'm glad you were tempted enough to buy Vintage 1954. I think you'll find it charming, as I did.

In your previous comment, you were right to say that our mutual love of Jack Finney is a good indicator that I'll enjoy this one, too. Since you enjoyed it and we both like Finney's books, I'm sure that I'll enjoy it also. We have "known" each other through book blogging for many years. During this pandemic world we find ourselves in, our long friendship is an indicator that we don't HAVE to speak face to face to "know" all our friends. I've had this saying at the bottom of the right sidebar of this blog for years: