The second week of Nonfiction November (November 8-12) is hosted by Katie at Doing Dewey.  This week, we are to pair up a nonfiction book with a fiction title.  It can be an "If you loved this book, read this!" or just two titles that you think would go well together.  Maybe it’s a historical novel, and you’d like to get the real history by reading a nonfiction version of the story.  I'm not on Instagram, so I can't really link up with her #NonficNov, which is frustrating.  Anyway, here are the two books I suggest for a pairing: 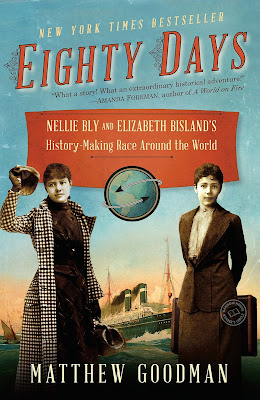 On November 14, 1889, Nellie Bly, the crusading young female reporter for Joseph Pulitzer’s World newspaper, left New York City by steamship on a quest to break the record for the fastest trip around the world.  Also departing from New York that day — and heading in the opposite direction by train — was a young journalist from The Cosmopolitan magazine, Elizabeth Bisland.  Each woman was determined to outdo Jules Verne’s fictional hero Phileas Fogg and circle the globe in less than eighty days.  The dramatic race that ensued would span twenty-eight thousand miles, captivate the nation, and change both competitors’ lives forever.

The two women were a study in contrasts.  Nellie Bly was a scrappy, hard-driving, ambitious reporter from Pennsylvania coal country who sought out the most sensational news stories, often going undercover to expose social injustice.  Genteel and elegant, Elizabeth Bisland had been born into an aristocratic Southern family, preferred novels and poetry to newspapers, and was widely referred to as the most beautiful woman in metropolitan journalism.  Both women, though, were talented writers who had carved out successful careers in the hyper-competitive, male-dominated world of big-city newspapers.  Eighty Days brings these trailblazing women to life as they race against time and each other, unaided and alone, ever aware that the slightest delay could mean the difference between victory and defeat.

A vivid real-life re-creation of the race and its aftermath, from its frenzied start to the nail-biting dash at its finish, Eighty Days is history with the heart of a great adventure novel.  Here’s the journey that takes us behind the walls of Jules Verne’s Amiens estate, into the back alleys of Hong Kong, onto the grounds of a Ceylon tea plantation, through storm-tossed ocean crossings and mountains blocked by snowdrifts twenty feet deep, and to many more unexpected and exotic locales from London to Yokohama.  Along the way, we are treated to fascinating glimpses of everyday life in the late nineteenth century — an era of unprecedented technological advances, newly remade in the image of the steamship, the railroad, and the telegraph.  For Nellie Bly and Elizabeth Bisland — two women ahead of their time in every sense of the word — were not only racing around the world.  They were also racing through the very heart of the Victorian age. 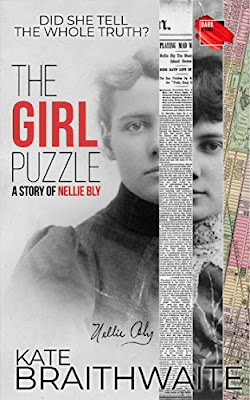 Her published story is well known.  But did she tell the whole truth about her ten days in the madhouse?  Down to her last dime and offered the chance of a job of a lifetime at The New York World, twenty-three-year old Elizabeth Cochrane agrees to get herself admitted to Blackwell’s Island Lunatic Asylum and report on conditions from the inside.  But what happened to her poor friend, Tilly Mayard?  Was there more to her high praise of Dr Frank Ingram than everyone knew?

Thirty years later, Elizabeth, known as Nellie Bly, is no longer a celebrated trailblazer and the toast of Newspaper Row.  Instead, she lives in a suite in the Hotel McAlpin, writes a column for The New York Journal and runs an informal adoption agency for the city’s orphans.  Beatrice Alexander is her secretary, fascinated by Miss Bly and her causes and crusades.  Asked to type up a manuscript revisiting her employer’s experiences in the asylum in 1887, Beatrice believes she’s been given the key to understanding one of the most innovative and daring figures of the age.

I haven't read either of these books.  I found the nonfiction/history book (at the top) online and bought the novel for my Kindle in April of this year.  An alternate that I could have substituted for the fiction is another novel about Nellie Bly, one that I read in 2015 (#25). 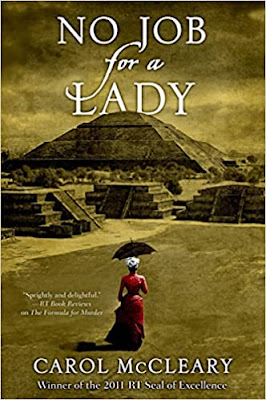 History, mystery, and murder are the traveling companions of Nellie Bly, the world's first female investigative reporter.  In this novel, Nellie defies the wrath of her editor and vengeful ancient gods while setting out to prove a woman has what it takes to be a foreign correspondent in dangerous Victorian times.  Pyramids, dark magic, and dead bodies are what the intrepid Nellie encounters when she takes off for Mexico after her editor refuses to let her work as a foreign correspondent because "it's no job for a lady."

It's 1886 and Mexico has not cast off all its bloodthirsty Aztec past.  Among the towering pyramids in the ghost city of Teotihuacán, Nellie is stalked by ruthless killers seeking Montezuma's legendary treasure and an ancient cult that resorts to the murderous Way of the Aztec to protect it.  Nellie travels with Gertrude Bell, who will go on to be called Queen of the Desert for her later exploits in Egypt, as well as the most glamorous and beautiful woman of the era, Lily Langtry, consort to the Prince of Wales.  Along for the ride is a young gunfighter called the Sundance Kid.  And there's the mysterious Roger Watkins, who romantically and physically challenges Nellie's determination to be an independent woman in a man's world.

I didn't choose this one, because I rated it only 7 of 10.  The subject fascinated me, but not this particular book.  I do like the cover, though.  The other two pair better, anyway, since both are about her trip around the world.  If you want to read more about Nellie Bly, take a look at what Wikipedia offers.

I've never read anything about Nellie Bly, but have heard bits and pieces about her. Your pairing seems like a good one!

Nellie Bly was such a fascinating person!