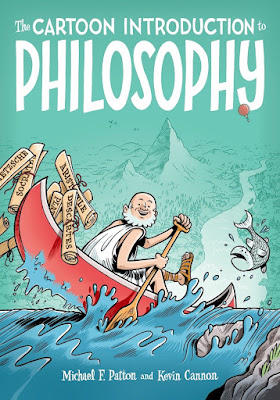 The Cartoon Introduction to Philosophy ~ by Michael F. Patton and Kevin Cannon, 2015, philosophy
Patton and Cannon introduce us to the grand tradition of examined living.  With the wisecracking Heraclitus as our guide, we travel down the winding river of philosophy, meeting influential thinkers from nearly three millennia of Western thought and witnessing great debates over everything from ethics to the concept of the self to the nature of reality.  Combining Cannon's playful artistry and Patton's humorous, instructive prose, this book puts the fun back into the quest for fundamental truths, imparting a love of wisdom to anyone willing to grab a paddle and join the ride. 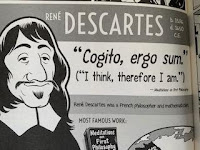 Philosophy was part of my double major for my first college degree, so I'm having fun reading this library book.  Heraclitus, our guide, paddles a canoe down "the River of Philosophy" (p. 6).  Early on, he shares his most famous observation:  "Twenty-five centuries ago, when I said that 'it is not possible to step twice into the same river' . . . I was remarking on the fact that everything around us is in flux, and change is the only constant" (p. 15).  My favorite line is from René Descartes:  "Cogito, ergo sum" ("I think, therefore I am"). 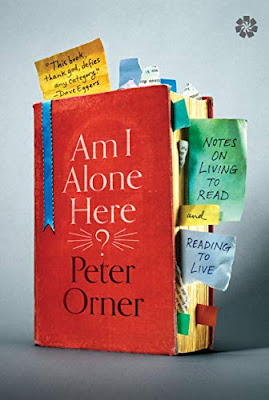 Am I Alone Here? : Notes on Living to Read and Reading to Live ~ by Peter Orner, illustrated by Eric Orner, 2016, essays

This National Book Critics Circle Award book is “an entrancing attempt to catch what falls between: the irreducibly personal, messy, even embarrassing ways reading and living bleed into each other, which neither literary criticism nor autobiography ever quite acknowledges" (The New York Times).   As the author says:  "Stories, both my own and those I’ve taken to heart, make up whoever it is that I’ve become."  Orner reads and writes everywhere he finds himself, whether in a hospital cafeteria, at a coffee shop in Albania, or on a crowded bus in Haiti.  The result is a book of unlearned meditations that stumbles into memoir.  He writes about many authors, including some I don't know.  Amazon says this book "will inspire readers to return to the essential stories of their own lives."

If any of you have this book, please tell me how to download the companion eBook mentioned on p. 299 in the book:  http://bit.ly/livetoread.  When I went there, it changed to:  https://catapult.co/pages/am-i-alone-here-companion.  I tried using both my Kindle and my laptop and got nowhere.  What am I doing wrong (or failing to do)?
Miscellaneous
While checking my email this morning, I noticed a story about the minimum wage "the year you were born."  Curious, I clicked on it and discovered that in 1940 (the year I was born), minimum wage was $0.30 an hour.  Thirty cents!  When I started working in my teens, my pay was $0.75 an hour; my pay for my first full-time job was $1.00 an hour.  Do you remember your first salary?

Deb at Readerbuzz hosts Sunday Salon,
a place for us to link up and share what
we have been doing during the week.
Posted by Bonnie Jacobs on 7/18/2021 03:00:00 PM
Labels: salon

Yes! I remember at one point I was making $2.17 an hour at part-time job in high school. I was thrilled the first time I broke $100 a week! I found Am I Alone Here? at my library! Yea!

I looked for Am I Alone Here? Notes on Living to Read and Reading to Live at my library (no luck) and ended up searching for it on Amazon. It was discounted to just $1.99. Who can resist just $1.99? Thanks for highlighting it today.

Wow. By the time I was born in 1956, minimum wage had gone up to $1 an hour. I remember earning $1.60 an hour the first year I worked, in 1973. Of course, if I go back even further, I remember earning fifty cents an hour to babysit six children when I was only thirteen.