Beginning ~ with a definition


1). A term of insult used by unimaginative sections of the church to define female pastors.
2). Female ecclesiastical superhero:  Trinity from The Matrix in a clerical collar.
"What on earth was that noise?"
"A pastrix just drop-kicked a demon into the seventh circle of hell." 3). Cranky, beautiful faith of a Sinner and Saint. 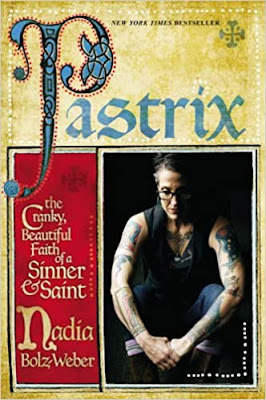 Pastrix: The Cranky, Beautiful Faith of a Sinner and Saint ~ by Nadia Bolz-Weber, 2013, memoir

Heavily tattooed and loud-mouthed, Nadia, a former stand-up comic, sure as hell didn't consider herself to be religious leader material — until the day she ended up leading a friend's funeral in a smoky downtown comedy club.  Surrounded by fellow alcoholics, depressives, and cynics, she realized:  These were her people.  Maybe she was meant to be their pastor.

This is a memoir? Tell me more. Wow. My Friday post

Ooo! I really like the sound of this! I'm already hooked. Adding it to my wish list. Thank you for sharing, Bonnie. I hope you have a great weekend.

Sorry, folks, but this is my NEXT book to read, so I can't tell you anything more about it yet. It interests me, too, and that's why I bought the book.