Masks, a word, and a memory 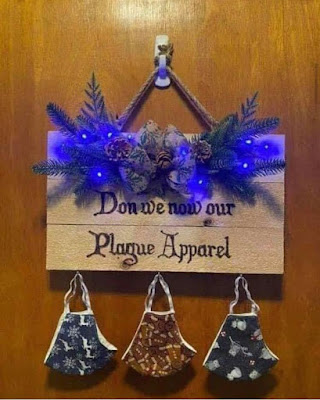 Pandemic
There's a Christmas song that includes the line "Don we now our gay apparel."  This slight change seems very appropriate as we get to December in this pandemic year of 2020:  "Don we now our plague apparel."  Yeah, wear your face mask whenever you go out.  Merriam-Webster's top word for 2020 is pandemic, which can be a noun or an adjective.

pan·dem·ic / panˈdemik / Noun = an outbreak of a pandemic disease.  Example:  "There was an influenza pandemic in 1918, and now we have a coronavirus pandemic in 2020."  Adjective = (of a disease) prevalent over a whole country or the world.  Similar adjectives:  widespread, prevalent, pervasive, rampant, epidemic, rife, universal, global.  Example:  "Some of us are suffering from pandemic malaise."

I'm sure that I'm not the only one to wonder about the difference between "pandemic" and "epidemic" (see the list of similar adjectives).

"An outbreak is called an epidemic when there is a sudden increase in cases.  As COVID-19 began spreading in Wuhan, China, it became an epidemic.  Because the disease then spread across several countries and affected a large number of people, it was classified as a pandemic."

"The man brought his attention back to her, as if he had just been woken from a deep sleep, his eyes moving slowly reminding her of a patient after an operation, when the effects of ether were still evident, before full consciousness had been regained" (pp. 248-249 of Among the Mad: A Maisie Dobbs Novel, 2009).

Maisie had been a nurse on the battlefield during World War One, which was called the Great War.  Ether was used as a general anesthetic, until non-flammable drugs were developed.  In other words, ether was used back in the olden days.  I'm an "olden" person, then, because I remember that ether was used to put me to sleep when my tonsils were removed when I was four years old in 1944.  No, actually, what I remember is Mother telling the story about my pediatrician trying to put me to sleep.
Dr. Starr held the cone or mask or whatever over my face for awhile, then removed it to see if I was asleep yet.  I said, "Boo."  He did it again, maybe waiting longer, and again I said, "Boo."  Eventually, I had to breathe and the ether got to me so they could remove my tonsils.  When I woke in an adjoining recovery room, Mother asked me, "Why wouldn't you breathe for Dr. Starr?"  My response was, "I didn't like that ole PEW-fume."
Posted by Bonnie Jacobs on 11/30/2020 04:15:00 PM
Labels: Bonnie, Coronavirus, word

I love Don we now our plague apparel!

ha ha - love your mask sign/holder! Hey, we have to keep a sense of humor, right?

Hope you enjoy your books this week -