Two beginnings ~ an old woman and an art teacher 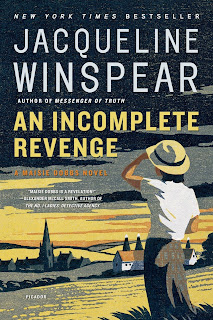 
"The old woman rested on the steps of her home, a caravan set apart from those of the rest of her family, her tribe.  She pulled a clay pipe from her pocket, inspected the dregs of tobacco in the small barrel, shrugged, and struck a match against the rim of a water butt tied to the side of her traveling home.  She lit the pipe with ease, clamping her ridged lips around the end of the long stem to draw vigor from the almost spent contents."


Marta Jones surveyed her students, casting her eyes around the studio, with its high ceilings and skeins upon skeins of colored yarn hanging from laundry racks raised up with pulleys and secured on the wall, and the six wooden looms pressed against one another, for space was at a premium."


With the country in the grip of economic malaise, Maisie Dobbs is relieved to accept an apparently straightforward assignment from an old friend to investigate certain matters concerning a potential land purchase.  Her inquiries take her to a picturesque village in Kent during the hop-picking season, but beneath its pastoral surface she finds evidence that something is amiss.  Mysterious fires erupt in the village with alarming regularity, and a series of petty crimes suggests a darker criminal element at work.  A peculiar secrecy shrouds the village, and ultimately she must draw on all her finely honed skills of detection to solve one of her most intriguing cases yet.

Sounds intriguing. I've been curious about this series for a while now. Even the covers are interesting! Enjoy, and have a great weekend!

One of these days I will read this series. It sounds like one I would really like. I hope you are enjoying this one! Have a great weekend.