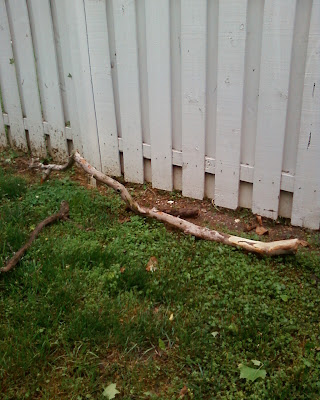 On the home front = tornado and storm damage

I intended to title this post "On the home front" until I noticed Sheila's "morning meanderings" post was "Weather I like it or not."  Hers was so perfect that I had to copy it.  Someone says there was a tornado in my neighborhood.  About 9:00 this morning, something hit my house, and our power went out.  It's still out.  This big limb by my fence was probably what hit the house, but look at damage reports coming in via our neighborhood email listserv:


9:17 a.m.  "My friend got a text stating that a tornado was spotted in St. Elmo.  Does anybody know where?  I hope everyone stays safe.  Is there a safe place outside our homes to go in St. Elmo?  Thanks!  Sent from my iPhone"
9:45 a.m.  "Anyone have any storm damage to report?  I heard there may be a power line and a tree down on Alabama [Avenue].  Also there is a huge tree snapped in half on the other side of the playground fence.
9:52 a.m.  "Buncha trees/branches down on Shauff & W54th including what looks to be a couple on houses."
9:59 a.m.  "Tree branches smoking on top of electric pole ... I can't get thru to EPB [our power company] and the non-emergency # said they'd send a fire truck to check it out, not fast enough for my liking. If you see an epb truck or fire truck in the n'hood, please give them the address of 4212 or 4210 St. Elmo Ave. And that the electric lines are burning into a pile of branches sitting on top of the lines. It could become an emergency. Thanks"
10:03 a.m.  "Two trees down near 46th and Tennessee, no one hurt. Street sign damaged as well.  Sent from my iPhone"  [Yikes!  That's two short blocks from me.]
10:06 a.m.  "Hello all....I am at work and wondering how St. Elmo faired the storm....I am in the dark downtown.  Sent via BlackBerry by AT&T"
10:13 a.m.  "If anyone is missing a dog, there is a German Sheppard running loose in the alley of the 4400 block of Tennessee Avenue.  I suspect that its fence may have blown down and the dog is taking the opportunity to sightsee around the neighborhood."
10:13 a.m.  Here is a link to pics from around the playground.  The mulch is the least of our concerns right now.  I also heard that Alabama [Avenue] is largely without power and that 3 houses were destroyed.  If anyone finds out who the houses belong to, let us know if we can help them!  Not all of us are without power."  [Note:  Earlier listserv writers were discussing the pile of mulch to be spread at the playground, which can be seen in one of the photos.]


10:24 a.m.  "How do we find out if the damage in St. Elmo was from a tornado or not? All I know is that I heard a loud rumbling sound and I ran to get my baby out of bed and head for cover. The trees in our front yard were whipping around like crazy, and our crepe myrtle which is almost two stories tall was bent in half. There is a lot of damage in st elmo and lots of trees and power lines down in st elmo and on missionary ridge (per my mom). You can download these pictures directly from picasa online." [She emailed the nearest local TV station.]
10:27 a.m.  "We have a tree uprooted in our backyard! Sadly, it took out our tree fort!  No power!  St. Elmo Ave!  Sent from my Verizon Wireless BlackBerry" [I also live on St. Elmo Avenue.]
10:42 a.m.  "40th west of Tennessee [Avenue is] a mess but also large tree and power out.  Blocked both directions."
10:44 a.m.  "3 houses disseminated [decimated] on old mtn. rd. by incline tracks...huge trees through roofs and windows."
10:48 a.m.  "P House is damaged.  The whole area around Everett has damage.  Trees down on at least six houses.  We're helping the P's move stuff from their damaged top story before the next storm comes.  Three houses have severe damage on or right next to Old Mountain Rd.  Lines down, one pole snapped and is on my neighbor's vehicle.  Worst I've seen in 16 years of living in the neighborhood.  Sent from my iPhone"  [Next cell of the storm was expected to hit around 2:00 p.m.]
11:03 a.m.  "Power pole snapping at 43rd and Tennessee [Avenue], ridge side.  Sent from my iPhone"  [We live between a 2000-foot mountain and a ridge at its base.]
11:03 a.m.  "From channel 12 [television station] ... There was a tornado in your area. Damage extensive."
11:09 a.m.  [My daughter, who lives 20-odd miles on the other side of town, phoned to check on me.  Schools and daycare centers all over town have closed, and she had picked up her grandaughter Raegan from day care.]
11:09 a.m.  "The 4500 block was hit hard.  Two houses near ours ... have trees through them.  Let's hope that no more happen in the next day as there are more storms headed our way."  [Which street?  I live in the 4600 block of St. Elmo Avenue.]
11:40 a.m.  "W 57th St damage ... A couple of trees have downed power lines here.  A huge tree on the other side of the creek behind my house fell and now fills my back yard.  It also knocked a couple of my trees down when it fell.  Sent from my iPad
11:42 a.m.  "There's a tree down [on?] the P House and 2 trees blocking Ochs [Highway, that goes up the mountain], a huge tree across 41st between al. [Alabama Avenue] & st. elmo [Avenue] that took down power lines, 8-10 big trees down all around the intersection of Ochs & Alabama ... If that wasn't a tornado, I'd be very surprised. More is coming.....everybody be safe.
12:09 p.m.  "Red Cross number for people needing help ... 265-3455 ... They are opening a shelter at our rec center [recreation center] at 1 pm for anyone who’s home is uninhabitable or anyone not feeling safe in their home right now.  Just announced on channel 9 [television]"
12:10 p.m.  "Anyone know what the top wire on the telephone poles is?  Maybe telephone wires?  I have one down on my front porch.  I'm on 39th St. behind Mojo [Burrito] and there are lots of trees down.  I can't even see down the hill."
12:18 p.m.  [My friend Ginnie reached me, as she was checking on our group of friends.  We are each okay, though my power's still out.  Donna's apartment (also in my gated senior community) is undamaged.]
12:40 p.m.  [Email from Ginnie to me: "Emily ok, still waiting to hear from Ellen."  Emily lives on the other side of the mountain, with Ginnie atop the mountain on that side.]
1:15 p.m. [Email from Ginnie to me: "Ellen's fine too, but no power."  Ellen lives on top of the mountain, almost directly above me.]
1:31 p.m.  "Sounds like the hardest hit was up behind the incline.  From there the tornado went up Alabama Ave.  A tree across from our house is down.   Thankfully fell right between four houses that are grouped very closely together.  We were home and could hear the whirring sound of the tornado, much louder than just a strong wind.  Went up Alabama and sadly knocked down one of the largest trees in the neighborhood just past 44th."  [Two blocks from me.  Alabama is the street behind my house.]
1:50 p.m.  "Florida between 46th-49th didn't fare very well, either - couple of trees on my neighbors' houses, and 47th connecting Florida and Tennessee is blocked with large trees and multiple lines down on both ends. Glad that the large tree that fell in our backyard went AWAY from the houses.  I walked up to Seneca where a friend still has power, and there are folks out with chainsaws clearing mid-to-large trees in their yards up here, too, though the damage to the lines seems much less.
1:53 p.m. "The tree across 41st destroyed the gazebo at the little park."
1:55 p.m. "Has anyone any idea when the power will be restored?"
2:00 p.m.  "Neighbors:   There's a lot of damage around the neighborhood, but thankfully many of the downed trees missed homes.  If you or your friends are one of the unfortunate ones to have some home damage, call [a St. Elmo company]."
2:01 p.m.  "Photos from the neighborhood ... I mostly got blocked roads--photos of the trees. I believe I made this link open to everyone.  This is very upsetting. I hope that we are going to be able to help each other who have no electric or no roof! Let us know how we can help you (or me, maybe after 5pm today). Maybe the tree over the electric lines will catch fire and I'll be posting something too.

I used food to entice Kiki into the bathroom, where I had candles, water, her bed on the floor, and other things I hoped we wouldn't need.  The storm lasted fifteen minutes, but I stayed put.  It started again a few minutes later, lasting only seven or eight minutes that time.  Kiki was afraid to let me pick her up, just in case it was a sneaky way to take her to the vet or something.  Finally we came out, and I left with my laptop for a cafe in Georgia that had power as well as free wi-fi.  I had already used up all battery power. Here's what I saw at Donna's corner (that's one of her windows next to the side door). 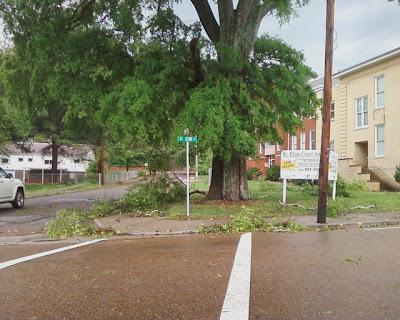 What a great neighborhood I have!  How did we manage before this kind of connection?

[I had to post this because the storm has arrived here, where I found wi-fi in Georgia.  My son just called three minutes ago, to tell me the television reports that the storm will hit St. Elmo in three minutes.  It did!]
Posted by Bonnie Jacobs on 4/27/2011 06:00:00 PM
Labels: Donna, Kiki, tornado

WOW. The weather sounds awful. Glad you are okay.