"The Lanyard" by Billy Collins ~ teaser 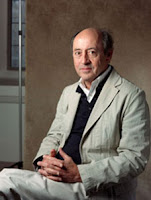 Alison at So Many Book, So Little Time recently wrote about Billy Collins, the Poet Laureate of the United States (2001-2003).  Her book group chose his book The Trouble with Poetry, or else she wouldn't likely have read that book.  Alison ended her post:


"The Lanyard" seemed to be a consensus favorite when the group met for lunch. For me, finishing the poem resulted in a gasp for air, so poignant are the final words.

I, of course, went looking for that poem, which I found on his web site.  I want to share it with you, along with photos I found in my memory and by googling until I found what I had visualized.


The Lanyard
by Billy Collins

The other day I was ricocheting slowly
off the blue walls of this room,
moving as if underwater from typewriter to piano,
from bookshelf to an envelope lying on the floor,
when I found myself in the L section of the dictionary
where my eyes fell upon the word lanyard.

No cookie nibbled by a French novelist
could send one into the past more suddenly—
a past where I sat at a workbench at a camp
by a deep Adirondack lake
learning how to braid long thin plastic strips
into a lanyard, a gift for my mother. 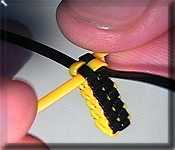 I had never seen anyone use a lanyard
or wear one, if that’s what you did with them,
but that did not keep me from crossing
strand over strand again and again
until I had made a boxy
red and white lanyard for my mother.

She gave me life and milk from her breasts,
and I gave her a lanyard.
She nursed me in many a sick room,
lifted spoons of medicine to my lips,
laid cold face-cloths on my forehead,
and then led me out into the airy light

and taught me to walk and swim,
and I, in turn, presented her with a lanyard.
Here are thousands of meals, she said,
and here is clothing and a good education.
And here is your lanyard, I replied,
which I made with a little help from a counselor. 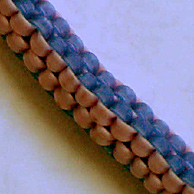 Here is a breathing body and a beating heart,
strong legs, bones and teeth,
and two clear eyes to read the world, she whispered,
and here, I said, is the lanyard I made at camp.
And here, I wish to say to her now,
is a smaller gift—not the worn truth

that you can never repay your mother,
but the rueful admission that when she took
the two-tone lanyard from my hand,
I was as sure as a boy could be
that this useless, worthless thing I wove
out of boredom would be enough to make us even.

Since reading Alison's post, I have picked up the book from my library, so now I can tell you this poem is on pages 45-46 of The Trouble with Poetry by Billy Collins, 2005.  I'm thinking of my mom as I write this.  She was very busy becoming a mother on this day, 71 years ago.  It's a debt I could never repay.