How to meet authors ~ Frank McCourt

Today's author was a "Teacher Man" with an Irish lilt.  I heard him and "saw" him, but he drew such a huge crowd that hundreds of us were shunted off to another auditorium and had to watch him televised on screen.  So I heard him and was in the same building with him, but I never got close to him. 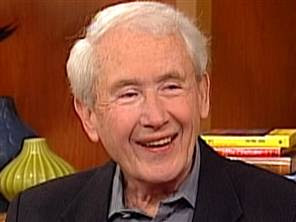 Frank McCourt (August 19, 1930 to July 19, 2009) was an American-Irish teacher and Pulitzer Prize-winning author who was best known for Angela’s Ashes. It had been awhile since I had read that book or his more recent one, Teacher Man, so I re-read parts of both books before going to hear him speak at the University of Tennessee at Chattanooga on February 19, 2008. He was addressing teachers, but I went mostly to hear the Irish lilt in his voice.

I have a green button I like to wear on St. Patrick's Day, maybe to pat myself on the back that I'm part Irish ... the part that has a story for every occasion, the part that likes to elicit a laugh or two for the stories I'm telling. Although I've never kissed the Blarney Stone, I do wear my green button which says, "I speak fluent Blarney." I like to think that I do. Frank McCourt's stories may make the audience (and his readers) laugh, but they aren't blarney.

According to legend, kissing the Blarney Stone endows the kisser with the gift of gab (great eloquence or skill at flattery).

Read more about what I got out of McCourt's lecture in my post about it.

I heard Teacher Man wasn't as good as Angela's Ashes, which I absolutely loved.

I liked them both, probably about equally. Very different, though, because Teacher Man is about his life as a teacher in New York City.