Synopsis:  "Ree Dolly's father has skipped bail on charges that he ran a crystal meth lab, and the Dollys will lose their house if he doesn't show up for his next court date. With two young brothers depending on her, 16-year-old Ree knows she has to bring her father back, dead or alive. Living in the harsh poverty of the Ozarks, Ree learns quickly that asking questions of the rough Dolly clan can be a fatal mistake. But, as an unsettling revelation lurks, Ree discovers unforeseen depths in herself and in a family network that protects its own at any cost." 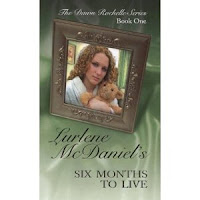 Six Months to Live ~ by Lurlene McDaniel, 1995, YA fiction


Synopsis:  "When 13-year-old Dawn Rochelle is diagnosed with leukemia, she's scared. While in the hospital undergoing chemotherapy, Dawn meets Sandy, who also has cancer. Dawn and Sandy battle the disease together, and remain best friends even after they both go into remission and return home. But when Sandy gets sick again, Dawn wonders what the future holds both for Sandy and herself."


Synopsis:  "After her ex-husband dies in a plane crash, Martha Gaver is horrified to learn that the executor of Raymond's estate is Charlie, the conservative, insufferable lawyer who represented Raymond in their bitter divorce. Yet soon after they reenter each other's lives, Martha, Charlie, and their teenage children find they have more in common than they imagined as they struggle to rebuild their lives ... and that opposites really do attract."


Synopsis:  "Alex Selky, going on seven, kissed his mother goodbye and set off for school, a mere two blocks away. He never made it. Desperate to find him, his mother begins a vigil that lasts for days, then weeks, then months. She is treated first as a tragic figure, then as a grief-crazed hysteric, then as a reminder of the bad fortune that can befall us all. Against all hope, despite false leads and the desertions of her friends and allies she believes with all her heart that somehow, somewhere, Alex will be found alive."

Library Loot is a weekly meme co-hosted by Claire from The Captive Reader and Marg from The Adventures of an Intrepid Reader that encourages bloggers to share the books they’ve checked out from the library.  Marg has the Mister Linky this week, if you'd like to share a list of the loot you brought home.
Posted by Bonnie Jacobs on 4/20/2011 10:48:00 AM
Labels: library loot

Domestic Pleasures sounds like a great read!
Enjoy your loot!