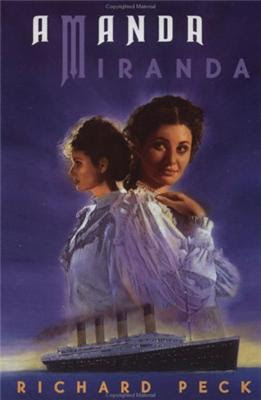 Two unrelated women who looked surprisingly alike, and both wanting the same man.  What a premise for a novel!  The book also uses a word that ties it completely to the Women Unbound reading challenge:

The book deals with a strong woman who knows what she wants.  That woman says:


"I want the freedom you men take for granted.  But I doubt I'd find that even in the Land of the Free, as you Americans so arrogantly call it.  I want to make my own decisions.  This is the twentieth century.  Yet women are still meant to be decorative by day and compliant by night, while men have cornered the market on freedom of choice" (p. 31).

One woman finds out something about the other:

Both women boarded the ship pictured on the front of the book (see the cover pictured above) and steamed toward America.  Need I tell you the name of that ship?  It was 1912, and one of the women would later think:


"I stood before one of the windows on our wedding night, and the hand that bore its new wedding band grew cold with memory of that other band it had worn.  And my other hand had signed two church registries, two marriage licenses within this single year" (p. 150).

There's also an abridged edition, published in 1999.  I've read both versions, and you get the whole story either way.  Find a copy, if you can, to see how both women were changed in the short time they knew each other.  I recommend this one as fun reading and a page turner.  Rated:  9 of 10.
Posted by Bonnie Jacobs on 3/21/2010 12:10:00 AM
Labels: book review, women unbound

Goodness, that's a book I haven't thought about in a long time. I remember getting it out from the library (probably not that long after it was originally published). I remember it as being a big, fat book with a blue cover, although the cover was different from the one shown there.

I read another book about the same time with a similar plot. It was smaller and about the Lusitania rather than the Titanic, but I can't remember the name of it. I think I had a tendency to mix the two up. (Oh, my memory is thinking of Dorothy Eden, excuse me while I go to Fantastic Fiction...) Found it: it was called "The American Heiress" and it was published in 1980 too. No wonder I get them confused, although this one was about the trip in the other direction.

Anyway, to get off that tangent, I definitely remember enjoying Amanda/Miranda. Thank you for the reminder.

I went to my library's catalog (it's online) and read the plot of The American Heiress by Dorothy Eden, and I see why you would get confused! Out of curiosity, I put the book on hold and will compare the two. Thanks, Kerry.

This encouraged me to look for both books in my own library system. I now have a reserve on The American Heiress, but they only have the YA edition of Amanda/Miranda and I'd really prefer to reread the version I read first. I'll keep my eye out for it and see what I think on The American Heiress on a reread.

I've read both versions, Kerry, and assure you there is nothing essential missing from the abridged (YA) edition. I originally read the 1980 edition and bought the YA version when I ran across it a few years ago at a used book store. I wanted to be able to lend the book to friends. If you can't find the original, the abridgment is very well done -- by the author himself.

Here's the "product description" of the YA version of 1999 that I found at an online bookstore:

"For years fans of Newbery Honor author Richard Peck's young adult novels have sought out hard-to-find copies of his first novel for adults, Amanda/Miranda. Published in 1980, this enthralling story of love and adventure against the backdrop of the sinking of the Titanic has been unavailable for over fifteen years. Now YA readers have an Amanda/Miranda all their own: a brand-new edition, abridged by the author especially for an age twelve-up readership. In 1911, eighteen-year-old Mary Cooke comes to stately Whitwell Hall to serve as maid for the strong-willed young Amanda Whitwell. To Mary's astonishment, her aristocratic new employer is her near-double. A dutiful servant girl, "Miranda" -- as her arrogant mistress renames her -- must stand by as Amanda ensnares both men whom Miranda herself loves. But when maid and mistress journey together on the Titanic, Miranda sees the chance to seize her destiny ... forever."

Okay, perhaps I'll give it a go after all. Thanks.

Hey, Kerry! I have now read and reviewed The American Heiress. Thanks for telling me about it. Here's the URL for my review:
http://bonniesbooks.blogspot.com/2010/03/american-heiress-by-dorothy-eden-1980.html