The Diaries of Eve and Adam 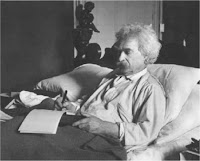 What if Adam had recorded his days in a diary?  What if Eve kept a diary, too?  What do you think they would have written?  What if Mark Twain got hold of the original manuscripts (or carved rocks?) and "translated" them for us?

I have just completed reading facsimile editions of Extracts from Adam's Diary (1904) and Eve's Diary (1906), each of which has the same subtitle:  "Translated from the original MS."  These are the funniest Mark Twain books I have ever read.  To begin with, Adam isn't too sure what he thinks of the "new" creature that we know as Eve.


Tuesday
"The new creature names everything that comes along, before I can get in a protest.  And always that same pretext is offered -- it looks like the thing.  There is the dodo, for instance.  Says the moment one looks at it one sees at a glance that it 'looks like a dodo.'  It will have to keep that name, no doubt.  It wearies me to fret about it, and it does no good, anyway.  Dodo!  It looks no more like a dodo than I do" (p. 5).

Saturday
"She fell in the pond yesterday, when she was looking at herself in it, which she is always doing.  She nearly strangled, and said it was most uncomfortable.  This made her sorry for the creatures which live in there, which she calls fish, for she continues to fasten names on to things that don't need them and don't come when they are called by them, which is a matter of no consequence to her, as she is such a numskull anyway; so she got a lot of them out and brought them in last night and put them in my bed to keep warm, but I have noticed them now and then all day, and I don't see that they are any happier than they were before, only quieter" (p. 33).

After reading Adam's diary, I imagine this cartoonist has the right idea.  Adam, after all, says right there in his diary that fastening names on the animals is all about the animals coming when they are called by those names, right?  Then THIS makes perfect sense: 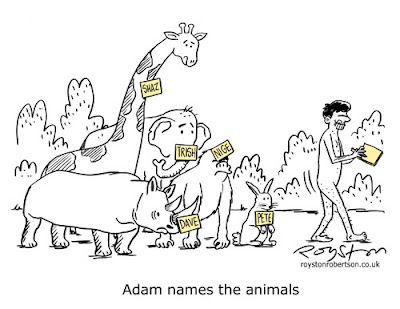 Here's Adam's idea of appropriate work for the woman and for himself:


Wednesday
"Another thing, she says it is ordered that we work for our living hereafter. She will be useful. I will superintend" (p. 49).

Adam was not around when their first child was born, so it's interesting to see him trying to figure out what "it" is:


Next Year
"We have named it Cain.  She caught it while I was up country trapping on the North Shore of the Erie; caught it in the timber a couple of miles from our dug-out -- or it might have been four, she isn't certain which.  It resembles us in some ways, and may be a relation.  That is what she thinks, but this is an error, in my judgment.  The difference in size warrants the conclusion that it is a different and new kind of animal -- a fish, perhaps, though when I put it in the water to see, it sank, and she plunged in and snatched it out before there was opportunity for the experiment to determine the matter.  I still think it is a fish, but she is indifferent about what it is, and will not let me have it to try" (p. 55).

Three Months Later
"The short front legs and long hind ones indicate that it is of the kangaroo family, but it is a marked variation of the species, since the true kangaroo hops, whereas this one never does" (p. 65).

Poor Adam.  Life was so confusing to him.  Decades ago I ran across a slogan that tickled my funny bone -- and seems entirely appropriate here:  "Adam was a rough draft."  Eve's diary shows us her curiousity and industriousness.  Here's a long quote that comes from pages 51, 53, 55, 57 -- every left page has drawings, and every right page has words. 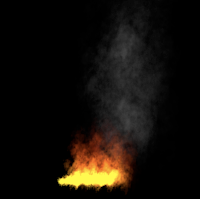 "I laid a dry stick on the ground and tried to bore a hole in it with another one, in order to carry out a scheme that I had, and soon I got an awful fright.  A thin, transparent, bluish film rose out of the hole, and I dropped everything and ran!  I thought it was a spirit and I was so frightened!  But I looked back, and it was not coming; so I leaned against a rock and rested and panted, and let my limbs go on trembling until they got steady again; then I crept warily back, alert, watching, and ready to fly if there was occasion; and when I was come near, I parted the branches of a rose-bush and peeped through ... but the sprite was gone.  I went there, and there was a pinch of delicate pink dust in the hole.  I put my finger in, to feel it, and said ouch! and took it out again.  It was a cruel pain. ...

I was curious to know what the pink dust was.  Suddenly the name of it occurred to me, though I had never heard of it before.  It was fire!  I was as certain of it as a person could be of anything in the world.  So without hesitation I named it that -- fire.

I had created something that didn't exist before; I had added a new thing to the world's uncountable properties; I realized this, and was proud of my achievement, and was going to run and find him and tell him about it, thinking to raise myself in his esteem -- but I reflected, and did not do it.  No -- he would not care for it.  He would ask what it was good for, and what could I answer?  For if it was not good for something, but only beautiful, merely beautiful --

So I sighed, and did not go.  For it wasn't good for anything; it could not build a shack, it could not improve melons, it could not hurry a fruit crop; it was useless; it was a foolishness and a vanity; he would despise it and say cutting words.  But to me it was not despicable; I said, "Oh, you fire, I love you, you dainty pink creature, for you are beautiful -- and that is enough!" and was going to gather it to my breast.  But refrained."

Eve discovered fire?  Why not?

Sounds like a lot of smiles going on there at your place, must see if I can find these to read. Thanks for all your great book reviews! Hope all is well with you there in the big city.

Susan, I got The Diaries of Adam and Eve from my library. It contains BOTH books, in facsimile format. If you can't find a copy, maybe you can read the copy in our library system when you are in my "big city." It really is quick reading, especially since I didn't take time to do more than skim the introduction by Ursula K. LeGuin, the foreword, and the afterword.

That sounds like fun! Mark Twain's satire is often right on. Sounds like Adam & Eve is no different.