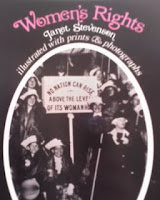 
"According to Sir William Blackstone, the most widely respected writer on the British Common Law, a woman stopped being a separate individual -- a human being -- at the moment of her marriage.  She suffered civil death" (p. 27).

That's interesting. When I planned to continue my college education, as my new husband had agreed before we were married, he said, "You're my wife now." He felt he had the right -- NOW -- to say what I could do, what he would allow.  And he saw no reason for a woman to attend college.  Not all men thought that way, according to this quote about Angelina Grimke's marriage to Theodore Weld:


"Since both the bride and groom agreed on the unfairness of the law that would condemn Angelina to civil death at the moment she became Mrs. Weld, they had decided to do without the usual rituals. ... they spoke to each other the vows that each had decided to make. Such a marriage was legal under Pennsylvania law, but unless one of the witnesses was a magistrate it could not be registered and was of little use in any lawsuit involving property. ... Love and honor were among the things they promised each other. Obedience was not" (p. 42).

I have never included "and obey" in any of the marriages I have performed. I explain to the bride and groom when we are planning the ceremony that I would only say "and obey" if both of them agree to obey the other. So far, they have always laughed -- and no one has taken me up on it yet.


Battle for the Ballot
The 1848 meeting of women at Seneca Falls was a landmark for women's rights.  Yet it wasn't until 1920 (72 years later) that women finally got the right to vote in the United States.


"One -- only one! -- of the women who signed the document ['Declaration of Principles'] on that summer day in 1848 would live to vote for the President of the United States the first time it was legal to do so. That was Charlotte Woodward. Neither Lucretia Mott nor Elizabeth Cady Stanton would see that victory. Nor would the two other 'generals' of the battle for the ballot: Lucy Stone and Susan Anthony" (p. 50).

Women got the right to vote, but other legislation pushed women further away from equal rights with men.

Where did you find the book? Don't you love finding old books?

Yes! I found this book at a used book store.

I'm looking over my bibliography right now for Color Online's Diversity Roll Call. I think it's a great idea! I'll put your link below for all my readers who want to see what's we're doing:

Please accept our invitation to review Wings & Dreams: 4 Elements of a New Feminism, to honor your commitment to women's rights.