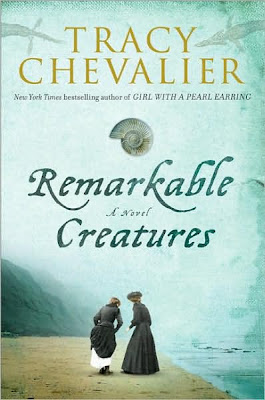 See the (pale) creatures at the top of this book cover? See the coiled fossil above the title?  These are things that Mary Anning found on the beaches and in the cliffs of Lyme Regis, back in the nineteenth century.  Yet men took credit for her discoveries.

You may wonder why, having found these things, Mary Anning wasn't hailed as the amazing fossil finder she was.  First, she was unlearned.  No, it wasn't a matter of not being bright enough to study science or get into college.  As a matter of fact, she was self-taught.  That's because she was a mere woman and considered, therefore, not capable of such.  It was systemic, with women being denied any chance to learn things like paleontology.  Mary was denied a formal education simply because she was a woman.

Second, she was poor.  She rummaged on the beach for curiosities to sell in her father's shop.  It was a way to supplement her family's meager income, though often she received no compensation at all for showing famous scientists how she could find these fossils.  How many discoveries has the world missed because women were not allowed to be involved?  And how sad is this bit from the book?


"We label the specimens, recording where and when we found them, and display them in cases with glass tops.  We study and compare specimens, and we draw conclusions.  The men write up their theories and publish them in journals, which I may not contribute to myself" (p. 97).

Now we have two books published recently about her.  We are nearing the 200th anniversary of Mary Anning's first major discovery, at the age of 12, in 1811.  Remarkable Creatures, a fictional account of her life, and The Fossil Hunter: Dinosaurs, Evolution, and the Woman Whose Discoveries Changed the World, a journalistic account by Shelley Emling.  I read about this second book in a New York Times article about books on science:  Tale of an Unsung Fossil Finder, in Fact and Fiction.  That's also where I found this picture: 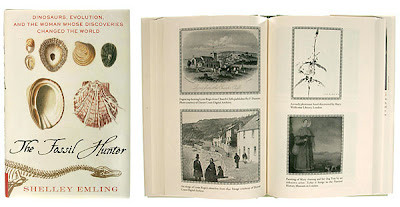 I've already mentioned this book three times recently -- in a teaser, in a list of books for my new discussion group, and yesterday when I wrote about women's history month.  You can be sure, if I talk about a book a lot, that it's a book I like a lot.  I probably won't read The Fossil Hunter unless my library gets a copy, but my rating of Remarkable Creatures is 9 of 10, an excellent book.
Posted by Bonnie Jacobs on 3/06/2010 01:32:00 AM
Labels: book review, women unbound

I have never heard of Mary Anning. What an amazing woman! So glad to know she is finally being recognized for her remarkable contributions to science.

Remarkable Creatures sounds fantastic! Thanks for bringing it to my attention!

Mary Anning is in the news again:
http://www.nytimes.com/2010/03/23/science/23creatures.html?partner=rss&emc=rss

I'm really looking forward to reading it. I wouldn't have know who she was except that she was mentioned in my daughter's Ivy & Bean book Break the Fossil Record.