I recently posted a couple of things about Virginia Woolf:  a birthday tribute and this teaser from the first paragraph of Virginia Woolf's A Room of One's Own: 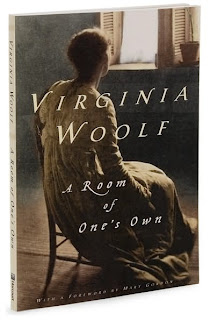 "But, you may say, we asked you to speak about women and fiction -- what has that got to do with a room of one's own? ... All I could do was to offer you an opinion upon one minor point -- a woman must have money and a room of her own if she is to write fiction ... I am going to develop in your presence as fully and freely as I can the train of thought which led me to think this. ... Fiction here is likely to contain more truth than fact.  Therefore I propose, making use of all the liberties and licences of a novelist, to tell you the story of the two days that preceded my coming here ... I need not say that what I am about to describe has no existence; Oxbridge is an invention; so is Fernham; 'I' is only a convenient term for somebody who has no real being.  Lies will flow from my lips, but there may perhaps be some truth mixed up with them; it is for you to seek out this truth and to decide whether any part of it is worth keeping."

This small quote says a lot about the book.  The main thing Woolf says, over and over, is that "a woman must have money and a room of her own if she is to write fiction."  She makes the point by telling "lies" that are full of truth -- in other words, she does it by using fiction, which often tells deeper truths that facts do.  Woolf may be making up stories, but it is obvious to me that she's telling us about things she has experienced.  So she says, "'I' is only a convenient term for somebody who has no real being."  She learned through experience that she, as a woman, is a nobody in the world of men.  Like the time she (or her fictional self) tried to enter a library and was told it was for men only.  How frustrating would that be, trying to do research as a writer and being told you had no access to the only place then available for finding the information she needed?  I copied that passage into my notes: 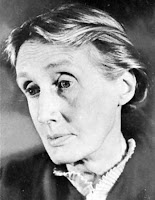 "...but here I was actually at the door which leads into the library itself.  I must have opened it, for instantly there issued, like a guardian angel barring the way with a flutter of black gown instaed of white wings, a deprecating, silvery, kindly gentleman, who regretted in a low voice as he waved me back that ladies are ony admitted to the library if accompanied by a Fellow of the College or furnished with a letter of introduction.  That a famous library has been cursed by a women is a matter of complete indifference to a famous library. ... Never ... will I ask for that hospitality again, I vowed as I descended the steps in anger" (pp. 7-8).

In spite of the difficulty women have found when they wrote or attempted to be published, Woolf thinks they may have been published more often than most of us realize.  She says,


"Indeed, I would venture to guess that Anon, who wrote so many poems without signing them, was often a woman" (p. 51).  [In another context, Virginia Woolf also said, “For most of history, Anonymous was a woman.”]

Beyond the oft-quoted point of this book -- that a woman needs space to get away from the world and money enough that she could focus on something besides survival -- Trisha, in her review at eclectic / eccentric, catalogs the reasons why, according to Woolf, women have not been writing "Great Literature":
Go read Trisha's review, the best I've seen on this book.  My rating of this seminal work:  9 of 10.
Posted by Bonnie Jacobs on 3/20/2010 10:08:00 PM
Labels: book review, feminist classics, women unbound