The American Heiress ~ by Dorothy Eden, 1980 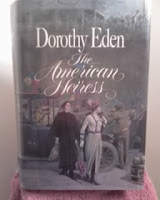 Last Sunday I reviewed Amanda/Miranda by Richard Peck and had a good "conversation" with Kerry in the comments (which you can read by clicking on the books title above).  Kerry, who lives in New Zealand, told me about this book:


"I read another book about the same time with a similar plot. It was smaller and about the Lusitania rather than the Titanic ... I think I had a tendency to mix the two up. ...  it was called The American Heiress and it was published in 1980 too. No wonder I get them confused, although this one was about the trip in the other direction."

My library system had two copies, both in storage -- that told me something right away, since Amanda/Miranda is still in circulation.  The American Heiress is easy reading but, other than the similar story line, it doesn't compare to Amanda/Miranda.  In The American Heiress, both women have the same father, but one is the legitimate daughter and the other is the result of the father's affair and becomes a lady's maid to her half-sister.  In both books the lady's maid survives a ship's sinking and, when mistaken for the "lady," seizes her opportunity and marries the "lord."  However, the writing is not as tight, the story stumbles along in places, and it just plain wasn't as much fun to read.

Participants in the Women Unbound reading challenge (read two books to be a philogynist, five to be a bluestocking, and eight to be a suffragette) may find it interesting to learn the word "bluestocking" was used three times in this book.  A young man from Toronto who was onboard the Lusitania said (p. 29):


"I was a history student.  I know the megalomaniac dreams of the Germans.  They want to be world conquerors."

"I liked history, too."  Hetty was pleased to have something else in common.  "Although I never had a proper teacher.  But I read a lot.  I read everything."

"Is it?  Didn't know you cared about pictures."

"Oh, I do."  She was emphatic.  "Having been so near to death I care passionately about everything.  Did you think I was just a party girl?"

"I'm getting to know you better by the minute.  You're not going to turn out to be a bluestocking, are you?"

He sounded slightly alarmed.  She must remember to be more Clemency, less Hetty, at the beginning at least.  Hetty the bookworm who had made herself invisible for hours in the library whenever she had had the opportunity.

"I'm not a bluestocking; I just look awful," she murmured, leaning her head against his shoulder.

What?  Must a bluestocking "look awful"?  Today the word means "a woman with considerable scholarly, literary, or intellectual ability or interest," but originally it was a derisive word for a woman considered too learned.  I rate The American Heiress 6 of 10, what I'd call above average, but that's all.
Posted by Bonnie Jacobs on 3/28/2010 12:07:00 PM
Labels: book review, women unbound