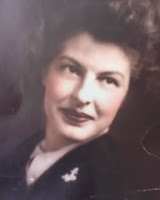 The most "independent dame" I ever met was Mae Carey, the mother of my best friend, Donna.  I was soooo impressed when I learned what she had done during World War Two.  Some time after they were married in 1942, Mae's new husband Don joined the Marine Corps.  She told him she planned to join the Women Marines, but he said she couldn't.  She agreed not to join the Marines.  Instead, she joined the Navy!  I love it!  Women in the Navy at that time were called WAVES (the acronym for "Women Accepted for Volunteer Emergency Service").  Women were not allowed in combat and had to remain stateside, so Mae worked in the lab in Long Beach.

The photo above shows Mae in her uniform in the 1940s, about the time of this recruiting poster.  After the war, Mae and her husband had three girls, and my friend is the middle daughter.  If Mae had been a young wife during the American Revolution, rather than during World War Two, I think she might have trooped along with her husband and even taken the place of a fallen soldier, if the need arose.  That's what a few wives did back then, according to the legend of Molly Pitcher and some of the stories in this children's book. 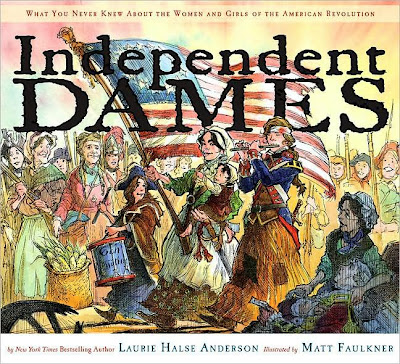 Independent Dames: What You Never Knew About the Women and Girls of the American Revolution shows children getting ready to produce a play, when suddenly people of the eighteenth century are there in the auditorium talking with them.  Maybe that's a metaphor for "coming alive" to the students, but it didn't work for me.  I also thought putting tons of facts along the bottom of the page made the whole thing too "busy." Maybe children like that sort of thing, though I rather imagine the kids would skip all those words and dates marching along the bottom of the double-spread pages.  I rate the book 7 of 10 because of the confusing storyline.
Posted by Bonnie Jacobs on 3/26/2010 11:55:00 AM
Labels: book review, Donna, Laurie Halse Anderson, women unbound

Laurie Halse Anderson wrote about Independent Dames today, linking also to an article about the book that she wrote: