Where the Mountain Meets the Moon ~ by Grace Lin, 2009 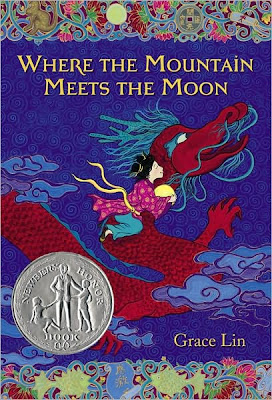 Grace Lin wrote and illustrated this book, so I'm going to give you some of both.  First, a taste of Grace Lin's writing:


"Every night the stars filled the sky like snowflakes falling on black stone and then melted away as the sun mounted" (p. 256).

China becomes a magical place as we follow a girl named Minli on a journey to change her family's fortune.  The opening words of the book show us an unappealing place.


"Far away from here, following the Jade River, there was once a black mountain that cut into the sky like a jagged piece of rough metal.  The villagers called it Fruitless Mountain because nothing grew on it and birds and animals did not rest there.  Crowded in the corner of where Fruitless Mountain and the Jade River met was a village that was a shade of faded brown.  This was because the land around the village was hard and poor" (p. 1).

Minli and her family are introduced on the next page.


"One of the houses in his village was so small that its wood boards, held together by the roof, made one think of a bunch of matches tied with a piece of twine.  Inside, there was barely enough room for three people to sit around the table -- which was lucky because only three people lived there.  One of them was a young girl called Minli" (p. 2).

And now I'll share a taste of the visual art Grace Lin gives us.  I discovered this sequence of images -- seeing the place become the sketch and then, when painted, the final illustration of the imperial garden (p. 134) -- at the Paper Tiger Blog.  There you can read an interview with Grace Lin, who shared her artistic process. 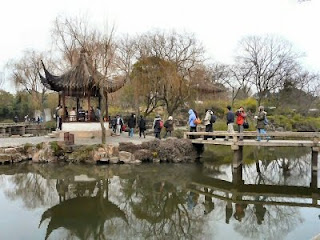 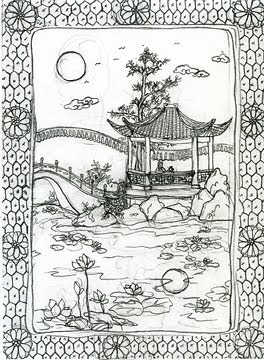 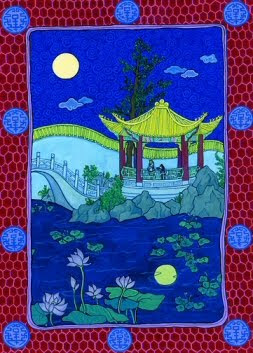 Grace Lin included stories within the bigger story. These are not chapters, but stories being told by someone Minli meets:


(Da-Fu and A-Fu are twins; together they are called Da-A-Fu, much as we might say "the twins.")

My favorite picture (found on p. 279) is shown below.  Isn't it beautiful? You'll have to read the book to know what it depicts. My rating of the book is 9 of 10. 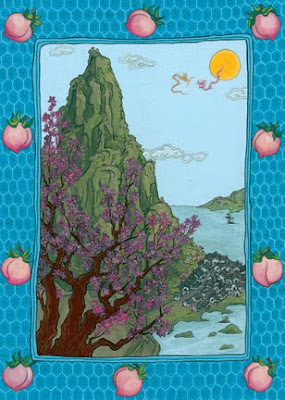 I have enjoyed the journey you've taken us on with your Women Unbound selections.

I love your new button, too. Beautiful.

I found the new button while visiting blogs of other Women Unbound reading challenge participants, and now I can't remember whose. Sorry. I'll look back and see if I can find it again -- or you can copy it from my sidebar.

Bitsy (whose blog is Fabula) designed three buttons, which I showed in a post the day after our conversation above. However, I forgot to come back here to post the link:
http://bonniesbooks.blogspot.com/2010/03/women-unbound-new-buttons.html