When Everything Changed ~ by Gail Collins, 2009 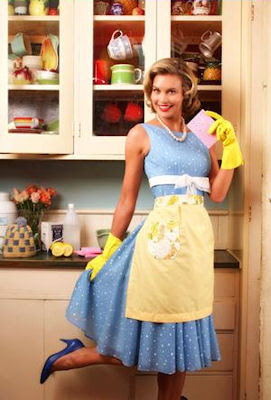 One young woman who has read When Everything Changed said the first part of the book felt like alien territory.  Not to me.  It felt like I was "there" again, back in the bad ole days of the 1960s and 1970s.  Gail Collins got it right.  From childhood on, my generation learned that it was a man's world.  Here are some examples from the book that I experienced, back in the day:


"On Father Knows Best, younger daughter Kathy was counseled by her dad on how to deliberately lose a ball game.  Teenage daughter Betty found happiness when she agreed to stop competing with a male student for a junior executive job at the local department store and settled for the more gender-appropriate task of modeling bridal dresses" (p. 14).

Maria K., a single mother working in upstate New York, remembered objecting to the fact that men doing the same things she did 'made twice as much,' and being told in response that 'they had families to support'" (p. 7).

"To facilitate employers' ability to discriminate, newspapers invariably divided their classified ads into HELP WANTED—MEN and HELP WANTED—WOMEN.  Medical and law schools banned female students or limited their numbers to a handful per class" (pp. 7-8).

I became an adult in the middle of all these "alien" things today's young women cannot imagine. It was 1973 when I was divorced after fourteen years and three children.   That's when I learned that HE got "our" good credit rating, while I had NO credit worthiness.   I wasn't the only one.


"In 1974 Kathryn Kirshbaum, the mayor of Davenport, Iowa, was told she could not have a BankAmerica card unless she got her husband's signature.  Billie Jean King was the winner of three Wimbledon titles in a single year and was supporting her household with the money she made from tennis.  But she could not get a credit card unless it was in the name of her husband, a law student with no income" (p. 250).


"By the time she went to college, Billie Jean had already won the Wimbledon doubles championship, but she was working her way through Los Angeles State as a playground attendant.  Athletic scholarships for women were virtually nonexistent.  Larry King, the aspiring lawyer whom she would soon marry, kept pointing out to her that he was 'the seventh man on a six-man team' as a tennis player and still got money from the school, while she was the best-known athlete on campus and got nothing" (p. 245).

All of this was considered, by most people (and all the men I encountered) to be perfectly normal — and obviously appropriate.  We women realized we needed to raise people's awareness about the inequities.


"The consciousness-raising group was the central tool of the women's movement, and it was as simple as a handful of people sitting down together once a week to talk about being women" (p. 186).

The other day I ran into a woman who was part of my consciousness-raising group in the 1970s.  We joined the National Organization for Women (NOW) and met regularly.  She told me she still has a box full of things from that time, and I look forward to sitting down with her to look through that box. Here's another kind of consciousness-raising that made me grin when I read it.


"The first [woman elected to California's state senate (in 1976)], Rose Ann Vuich, had ... become famous for sitting through senate debates with a little bell, which she would ring every time a speaker addressed his colleagues as 'Gentlemen' " (p. 256). 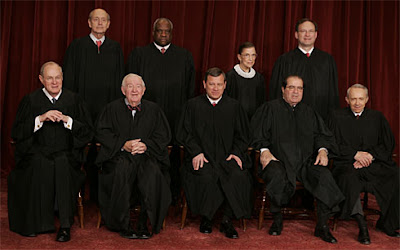 While we are talking about women in government, I really have to tell you about Ruth Bader Ginsburg's application for a Supreme Court clerkship in the 1970s:


"Justice Felix Frankfurter rejected her after asking, 'Does she wear skirts?  I can't stand girls in pants' " (p. 242).

Even if you don't know what she looks like, you can probably pick her out of this line-up.  From 2006 until 2009, she was the only woman on the Supreme Court.  (Sandra Day O'Connor retired on January 31, 2006, and Sonia Sotomayor assumed office in August 2009.)

The full title of this book is When Everything Changed: The Amazing Journey of American Women from 1960 to the Present.  Yes, things changed, but not EVERYTHING.  Discrimination against women has not disappeared yet, though I do admit that things have improved in fifty years.  This book gets my highest rating — it's that good — 10 of 10.

For the record, women in 1959 did NOT mop and clean while wearing high-heeled shoes and fancy dresses — no matter what the television commercials showed!  (See the top photo.)
Posted by Bonnie Jacobs on 3/18/2010 04:49:00 PM
Labels: book review, women unbound

Great post! This seems very interesting. And BTW, my mother never wore heels and a dress to cook or clean!

Not everything has change, but it's definitely an improvement. I had to have my husband's approval when I opened a separate savings account at our credit union. He was the one employed and therefore "the account owner", so I was not allowed to open a SAVINGS account without him. Not checking -- just savings. Even my husband was thoroughly pissed off.

I really enjoyed reading this. Thanks for the great review.

I loved your post, Bonnie! I added When Everything Changed to my wishlist. I like how you linked the book to your own experiences from those years.

By the way, I have bookmarked your review of Half the Sky, but I am saving reading any reviews for that one until I finished my own review - hopefully over the weekend.

Love this review and your personal thoughts to go along with it, you were there! Yes, not everything has changed, but we have come a long way baby!