Evensong by Gail Godwin, the sequel to Father Melancholy's Daughter (which I reviewed yesterday), is also told from Margaret Gower's point of view.  This story shows us Margaret as a married woman, who has become an Episcopal priest, like her father.

I had read both of these books, years apart, back when they were new (or at least newer).  So it's been a very long time (published in 1991 and 1999).  So I was in for a couple of surprises when I decided to re-read them -- together -- for the Women Unbound reading challenge.  I remembered that Margaret had become a priest and the general story line.  But let me tell you about a couple of things that surprised me.  Some of you may remember that I wrote about having a RE-birthday party to celebrate one year since my bypass surgery, which gave me new life and vitality.  Exactly one week later, I started reading this book and found THIS on page 9:


"I remember one evening in particular, the evening of Madelyn's 'new birthday.'  She had proclaimed that from now on she would celebrate her birthday on the date of her successful triple bypass the previous year, when she had been born again."

Madelyn wasn't the main character, and her "new birthday" was just a couple of sentences in a 405-page novel.  Did I subconsciously remember that from about a decade ago?  Or did the author and I both dream it up independently?  Whatever, the synchronicity of finding it just after celebrating MY new birthday was really a strange feeling. 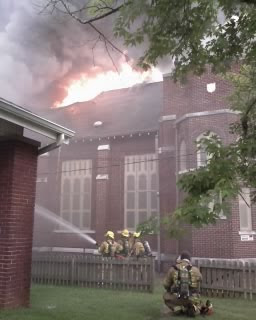 Another part of the book that was much more immediate and real to me this time was a fire at the church in the novel.  It felt eerie in that I had witnessed the fire that burned down the church a block from my house only six months earlier.  I wrote about the church fire back in August, here and here.  This photo is one I took while the church blazed.  The destruction of the St. Elmo church hit me hard because I had preached a series of sermons there a few years back and had visited a Sunday morning service not long before it burned.

This book had already been one that I felt a kinship to because Margaret, the main character, was the pastor of a church.  I am an ordained United Methodist minister, which means we don't do the rituals and wear the same vestments that Episcopalians do, but I could relate to her doing weddings for members of her church and being called in the middle of the night to go through the fog to be with a new widow at the hospital.  I wrote down what the undertaker said when he was talking to that widow.  It's an interesting thought:

I don't know if life is imitating art or the other way around, but I found a lot of agreement with things Margaret thought:


"I recalled my father saying he sometimes felt his most vital mission at St. Cuthbert's wasn't to comfort the afflicted but to afflict the comfortable.  'We can't all be so fortunate as to minister to lepers and thieves and prostitutes,' he'd say.  'Some of us are called to the much less dramatic task of stirring up the sediment in complacent souls'." (pp. 42-43).

This book is perfect for the Women Unbound reading challenge (this link takes you to my musings on being a feminist).  Margaret is musing here about the discussion she and her oldest friend had about names:


"She had been baiting me, in her usual Harriet-way, this time about my choosing to take Adrian's name.  Having 'kept' hers when she married Georgie Gaines, she was going on about this being yet another symptom of my self-obliterating intentions, meanwhile preening over her own 'gesture of independence' until finally I had enough and pointed out that it was no more independent to keep your father's name than to take your husband's, and, if she really believed independence was a matter of what you called yourself, then the truly independent gesture on her part would be to give herself an entire new name, devoid of all parental input" (p. 112).

My rating stays the same as before:  10 of 10, because I couldn't put it down either time.