You can fight fire with fire 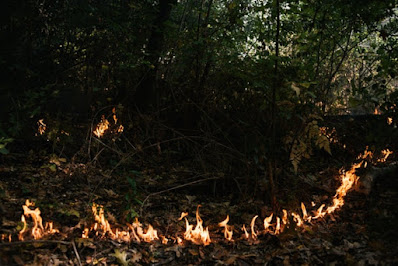 National Geographic has an article on fighting fire with fire the way the indigenous tribes had done it, by controlled means.  That may be key to putting a stop to California's wildfires.  The tribes have fire-lighting brigades to carefully set fires in order to manage the forest as their ancestors did.  Did you notice they are fire lighters rather than fighters?


"Fire was a tool to be used for the common good rather than a disease to be eliminated" (National Geographic).

Last year, the Guardian had a similar article on controlled burning the way indigenous people did.  These two articles explain the many reasons for burning the undergrowth.
Posted by Bonnie Jacobs on 12/27/2020 01:15:00 AM

This is called a "backfire" and is in use today. So is digging wide trenches and anything else that gives an approaching blaze less fuel to spread. However, the high winds present during the fire season on our West Coast as well as seasonal drought make these methods ineffective.

The intense heat from the massive wildfires sometimes causes "fire-tornados." A soaking rain is the only sure way to control wildfires but water and chemicals dropped from aircraft help to keep fires from spreading.

Did you read the article, Carolyn? They don't wait until "fire season" to set the fires, and the indigenous people have done it for centuries. It isn't a matter of setting a "backfire," but of getting rid of the undergrowth before it builds up to the point of fueling massive fires.