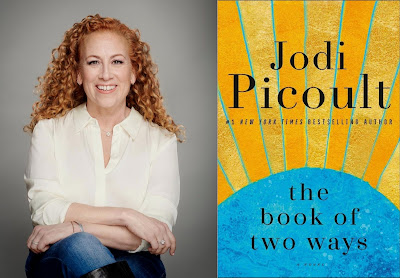 My calendar is full of dead people.

My mother, who lived and died by superstitions, used to make us say together before we went on a trip:  We're not going anywhere.  It was meant to trick the Devil.  I can't say I believe in that kind of thing, but then again, I didn't say it before I left home, and look at where that got me.

When I get home, Brian is waiting.  He stares at me as if I am a hallucination, and then he approaches me cautiously — the way you would move toward a feral animal or someone whose world has gone to pieces around her.

The Book of Two Ways ~ by Jodi Picoult, 2020, fiction (Egypt and Boston, Massachusetts)

Everything changes in a single moment for Dawn Edelstein.  She’s on a plane when the flight attendant makes an announcement:  Prepare for a crash landing. She braces herself as thoughts flash through her mind.  The shocking thing is, the thoughts are not of her husband but of a man she last saw fifteen years ago:  Wyatt Armstrong.

Dawn, miraculously, survives the crash, but so do all the doubts that have suddenly been raised.  She has led a good life.  Back in Boston, there is her husband, Brian, their beloved daughter, and her work as a death doula, in which she helps ease the transition between life and death for her clients.

But somewhere in Egypt is Wyatt Armstrong, who works as an archaeologist unearthing ancient burial sites, a career Dawn once studied for but was forced to abandon when life suddenly intervened.  And now, when it seems that fate is offering her second chances, she is not as sure of the choice she once made.

After the crash landing, the airline ensures that the survivors are seen by a doctor, then offers transportation to wherever they want to go.  The obvious destination is to fly home, but she could take another path:  return to the archaeological site she left years before, reconnect with Wyatt and their unresolved history, and maybe even complete her research on The Book of Two Ways — the first known map of the afterlife.

As the story unfolds, Dawn’s two possible futures unspool side by side, as do the secrets and doubts long buried with them.  Dawn must confront the questions she’s never truly asked:  What does a life well lived look like?  When we leave this earth, what do we leave behind?  Do we make choices . . . or do our choices make us?  And who would you be if you hadn’t turned out to be the person you are right now?

An illustration from the book
This is the wavy map of the Egyptian Book of Two Ways (pp. 259-260).  When I borrowed this book from my friend Donna, I was in the middle of reading Jacqueline Winspear's The Mapping of Love and Death: A Maisie Dobbs Novel (2010).  Both books are about maps and death.  That's eerie.  Maurice, who is Maisie's mentor, said in an earlier book in the series that "coincidence is a messenger sent by truth" (p. 50 in Birds of a Feather, 2004).  Is this one of Maisie's "coincidences"?  And look at this Amazon comment:

"To have a book dropped wordlessly in the night into your Kindle in a night you are climbing out of recovery for Stage 4 cancer treatment, and to have the book be this one, this spiritual agnostic acknowledges, again, that there are forces in our world at work that we cannot explain.  To say I couldn't put this down is clichéd, and I did.  I had to sleep.  But I didn't stop thinking. I have never ran a complete parallel conversation in my brain as I did with this one.  I will need to re-read to capture all the Egyptology details, and confirm what time spinning I believe took place.  I can't imagine the brilliance of how to weave quantum physics, Egyptian pathways, and death doulas into a love story for a daughter, a mother, a brother, a lover and a husband — and maybe even a little growing love for self and all that is sacrificed in living life and all that we fear when faced with dying.  Thank you, Jodi.  It's the book I wanted to read before I died."

Such a great first line. I loved this book.

Maybe I should try to give this author another try. Thanks for sharing.

I keep hearing great things about this book. I really like that opening. The Amazon comment you shared it high praise! There has been the occasional book that I have read that has been such a perfect fit for where I am in my life at the moment I am reading it. It sounds like she had a similar experience. I hope you are enjoying it!