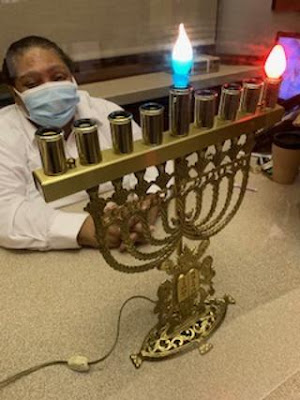 One candle has been lit on the menorah to celebrate the first day of Hanukkah today.  This one is at the Link Desk between our two high-rise buildings here at the Crown Center.  Darlene was the person on duty when I went down to pick up my prescriptions and check the mail.

me·nor·ah / məˈnôrə / noun = a candelabrum used in Jewish worship, especially one with eight branches and a central socket used at Hanukkah.

Ha·nuk·kah / ˈhänəkə, ˈKHänəkə / noun = a lesser Jewish festival, lasting eight days from the 25th day of Kislev (in December) and commemorating the rededication of the Temple in 165 BC by the Maccabees after its desecration by the Syrians.  It is marked by the successive kindling of eight lights.

Nice that the Crown Center is lighting lights for the holiday.