Thinking about words and phrases today 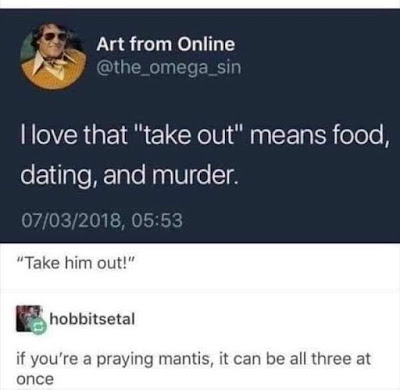 I ate takeout (it's one word, when used this way) with Sheila, Donna, and Alyssa on Sunday.  Panera delivered, and we ate out back, while staying socially distanced.  Unfortunately, it was hot with very, very scattered raindrops occasionally.  But no downpour.


takeout / tākˌout / noun = in North America, takeout is food that is cooked and sold by a restaurant or store to be eaten elsewhere.  Example:  "We decided to order takeout."

take out (2 words) = to borrow something from a place.  Example:  "Instead of buying that new book, I can take it out from the library."  Another example:  "A teenager hopes the boy she likes will take her out this weekend."  And as the image I found on Facebook says (above), a movie gangster may mutter, "Take him out!"

take out (2 words) = In seamstress language, when you want to make a garment longer you take out the hem.  Basically you are cutting the stitches and pulling the thread out of the hem to reclaim the length that was taken up by the hem.  (Thanks to Emily for this additional way of using the word, posted in the comments below on 7/10/2020.)

The degree symbol is commonly used when referring to temperature or an angle's measurement.  This wikiHow tells you how to type the degree symbol on a Windows or Mac computer, an iPhone, or an Android.
Posted by Bonnie Jacobs on 7/08/2020 07:00:00 PM
Labels: Alyssa, Donna, Emily, Sheila, Wednesday Words

In seamstress language, when you want to make a garment longer you'take out' the hem. Basically you are cutting the stitches and pulling the thread out of the hem to reclaim the length that was taken up by the hem.

Yes, I've "taken out" hems, too. I didn't think of that particular use of "take out," so thanks for adding it.