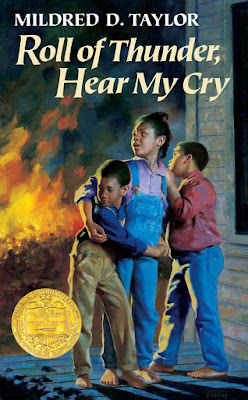 
Winner of the Newbery Medal, this remarkably moving novel has impressed the hearts and minds of millions of readers.  Set in Mississippi at the height of the Depression, this is the story of one family's struggle to maintain their integrity, pride, and independence in the face of racism and social injustice.  And it is also Cassie's story — Cassie Logan, an independent girl who discovers over the course of an important year why having land of their own is so crucial to the Logan family, even as she learns to draw strength from her own sense of dignity and self-respect.

All the Days Past, All the Days to Come ~ by Mildred D. Taylor, 2020, historical YA fiction


Generations of American schoolchildren have grown up with Cassie Logan and her brothers, Stacey, Christopher-John, and Clayton-Chester, otherwise known as Little Man, since the saga began in 1976 with Roll of Thunder, Hear My Cry.  This novel is the conclusion of the award-winning Logan Family series.  Cassie is no longer a child in this volume, but now a college graduate embarking upon her life journey as she comes to appreciate her mission in life and courageously acts upon it, eventually becoming a lawyer active in the Civil Rights Movement.


Esperanza thought she'd always live a privileged life on her family's ranch in Mexico.  She'd always have fancy dresses, a beautiful home filled with servants, and Mama, Papa, and Abuelita to care for her.  A sudden tragedy forces Esperanza and Mama to flee to California and settle in a Mexican farm labor camp.  Esperanza isn't ready for the hard work, financial struggles brought on by the Great Depression, or lack of acceptance she now faces.  When Mama gets sick and a strike for better working conditions threatens to uproot their new life, Esperanza must find a way to rise above her difficult circumstances — because Mama's life, and her own, depend on it.


The townspeople of Oran are in the grip of a deadly plague, which condemns its victims to a swift and horrifying death.  Fear, isolation and claustrophobia follow as they are forced into quarantine.  Each person responds in their own way to the lethal disease:  some resign themselves to fate, some seek blame, and a few, like Dr. Rieux, resist the terror.  The Plague is in part an allegory of France's suffering under the Nazi occupation, and a timeless story of bravery and determination against the precariousness of human existence.


An English village quarantines itself to arrest the spread of the plague after an infected bolt of cloth carries plague from London.  A housemaid named Anna Frith emerges as an unlikely heroine and healer, as she and her fellow villagers confront the spread of disease and superstition in the fateful year of 1666.  As death reaches into every household and villagers turn from prayers to murderous witch-hunting, Anna must find the strength to confront the disintegration of her community and the lure of illicit love.  As she struggles to survive and grow, a year of catastrophe becomes instead a "year of wonders" (annus mirabilis).  This novel was inspired by the true story of Eyam, a village in the rugged hill country of England.

The two books by Mildred D. Taylor are in a series, so I need to read the older one first.  I'm reading them to continue learning about racism and social injustice.  Esperanza Rising seems to also be about fighting injustice.  The last two are re-reads that came to mind because of our current Coronavirus plague.  I discovered, while looking for a picture of the book's cover, that Nancy of Bookfoolery read and reviewed The Plague three years ago.  I want to see what she said, after I re-read this one.
Posted by Bonnie Jacobs on 7/01/2020 08:30:00 AM
Labels: library loot

What a fantastic group of books! I love the variety and the choices. Enjoy!