To Be Where You Are ~ by Jan Karon 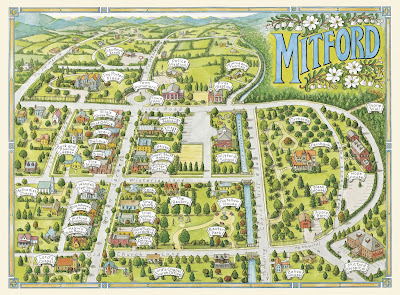 
This is the 14th book in the Mitford series, set in the very small fictional town of Mitford and centered around Father Timothy Kavanagh, an Episcopal priest who has retired since I met him in the first Mitford novel, published in 1994.  I always use the endpaper maps to figure out where we are in the story, but I'm still not sure which way we go from town to get to Meadowgate, home of Dooley and Lace, Father Tim's adopted son and his new bride.

What can I say about this book?  I saved a few quotes that mean something to me, and I see they are about four different residents of the town.


'If you were still mayorin', we might get those people to clean up th' trash in their parkin' lot!'  Though the old mayor was beyond her prime, Lois liked flattering her just the same.  Esther gave her a look.  'Now that th' Muse has pronounced me dead, I don't have to think about such as that'.


'What is your hope,' said Paul, 'for any ministry you may undertake?'
'To help people love God so they can learn to love themselves and each other.'
'Is that it?'
'Yessir.  Essentially.'
Father Brad looked pleased, even paternal.


How could people let go of their old things, when each told a part of their story?  Old things were a literature, a narrative.

Why did these quotes stand out for me?  I thought the first was funny.  The second says a lot about my idea of ministry being compassion and caring.  The third reflects the thorn in my side:  the clutter I need to get rid of now, this year, this month, this week, this day.  (Yes, I plan to declutter more often, starting today.)